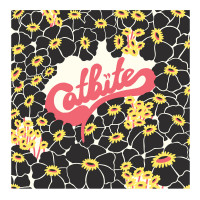 This is how you do a modern ska record. And if you need more clarification, the way to do a modern ska record is to not do a straight up ska album. For sure, Catbite are influenced by the two-tone champions of yore- The Selector is a particular reference point. But for every upstroke and bouncing bass line (there’s no horns, thank God) the band adds a splash of ‘50s rock, ‘60s soul, or ‘70s punk. And yes, all of those elements are anchor points. “Amphetamine delight,” like so many of those early punk singles, seems to salute drugs more than anything else. But, the band isn’t going pure retro.

It helps that vocalist Brittany Luna is classical trained. She’s clearly in total control of her voice, here, which allows her to focus on feeling instead of technique. A sort of Motown warmth radiates through her performance, even when she’s zapping out with some punk rock spunk. Closing track, “Scratch Me Up” finds Luna descending (or ascending) into a primal mania, but the whole time, even when she’s freaking out, she’s relatable.

It certainly helps that guitarist and co-founder Tim Hildebrand is as flexible as he is reverent. “Already Gone” rolls forward with a laid back rocksteady beat and could have been dropped on Tighten Up and no one would have notice. Meanwhile, “Come On Baby” manages to wrangle that rare moment in ’78 when the punks captured two-tone at its height before loosing control of the whole thing. But wisely, instead of just doing a pure ska review, Hildebrand kicks it up with some spiky punk striking on “Midnight Eyes.”

Even though Catbite is the group’s first proper release, it’s surprising how fully formed this is. It’s brief at a mere eight tracks, but it appears the band carefully plotted what they wanted to do- generate the bop of those classic checkered singles without falling prey to caricature. They don’t. The monster track, “Can’t Give You Love” may have gauze-y focus on a scratchy Jamaican single, but wisely the band focuses more on spirit and essence than technique. In doing so, they conjure that same magic that springs from the Trojan Box set while stating present, or perhaps moreso, staying timeless.

Neck: You Don't Think It's Evil