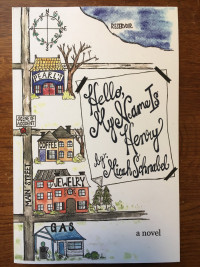 I’m going to admit right off the bat that I don’t know much about Micah Schnabel’s music, including his band Two Cow Garage. And I didn’t know he wrote a novel until I attended one of his solo acoustic shows a couple months ago. At the end of the show, I decided to buy his book, solely on the belief that if he writes books like he writes songs, then I’m sure I’ll enjoy it. And I was right.

Hello, My Name is Henry takes place in a small Ohio town where everyone knows everyone and people rarely leave. The book is told from the perspective of the Henry, a 28 year old who works the night shift at a gas station convenience store. He lives by himself in a very modest apartment and he mostly keeps to himself, though he’s friendly with everyone. He still visits his Mother on occasion and he has pleasant conversations with most people, yet it’s clear from the beginning that Henry is somewhat of a recluse. And while he makes some new friends throughout the novel, his one and only true friend is Josh, who moved out of town a few years back. Josh and Henry correspond often through mail and their friendship is characterized throughout these letters.

The novel is very easy to read, but that doesn’t necessarily dumb it down. The characters are generally developed through their dialogue with Henry and his perspective, which makes it easy to picture all of the people he interacts with. Surprisingly though, Henry never interacts with anyone in a romantic or sexual manner. At first, I was somewhat unsure if this was believable for a 28 year old. But, upon finishing the book, it was actually really refreshing to read a novel where there is no romantic interest for the protagonist.

The description of the town, Brooksville, is just as vivid as the characters, though I had trouble deciding if American towns could be so simple, yet complicated at the same time. While I was reading, I wasn’t sure if this was simply a romanticized view of small town America. But that could be simply due to my ignorance or naivety, and not necessarily the fault of the author, who wrote the book based on his own experiences and hometown. On a side note, my brother-in-law (who didn’t know I was reading the book) recently described his visit to his hometown in Iowa and it was pretty damn close to the town in the novel. So, I guess they do exist.

As the novel progresses, Henry battles with the idea of leaving his hometown. As a result, the book gives a pretty clear perspective of modern day America. Without being specific, topics like abortion, politics, religion, and labor pop up occasionally through Henry’s inner and outer dialogue without being too pushy or assertive. And there’s a good chance that Henry’s views represent the author’s views, yet the reader could never know for sure simply by reading the book.

Overall this was a very pleasant read, though Henry goes through some experiences that are not-so-pleasant. Despite living in a boring town, a lot happens to Henry in his lifetime. Some of it is heartbreaking. Some of it is shocking. Some of it is happy. All of it is interesting. The novel is simple, yet thought provoking with characters that will resonate and stick with most readers.