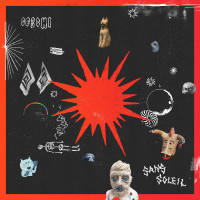 Ceschi is a strange creature. While he raps, and is considered a member of the underground hip-hop scene, he has somehow created a strong following in the DIY Folk Punk Scene. He did a split with Pat the Bunny, Whitney from Days N Daze starred in a recent music video, and he did an acoustic set on Punk with a Camera’s DIY sessions. He name drops Bad Brains and Minor Threat, so its clear he has Punk in his veins, despite producing music that, in most ways, shouldn’t fit into these scenes.

Sans Soleil is his second album in a marketed trilogy, of which will be his last musical projects. Announcing your retirement from music must be freeing, because both his last album, and this second piece of the three, have felt like all the weight was dropped from Ceschi’s shoulders, allowing him to release a truly “free” piece of art. Sad, Fat Luck, the first of the trilogy, was an excellent album, but this follow-up was unexpectedly brilliant. I had prepared myself for something lesser than his last album because it was going to be hard to top, and I had convinced myself that this being the middle album, would likely be my least favorite. No real reason behind that, other than the fact that most middles to a trilogy are not the best.

The first couple tracks are traditional Ceschi: dark, yet inspiring lyrics rapped over less than traditional hip hop beats. Then, from out of nowhere, on track four, Pat “the Bunny” Schneeweis voice erupted in my ear drums. I hadn’t heard his recorded voice on anything new in about three years. Shortly after Pat’s spoken word, Ceschi plays a simple ballad with an acoustic guitar, and I was immediately brought to a state of sadness, nearing tears. Ceschi’s last album centered around the themes of loss and grief, and it was clear that these themes weren’t temporary.

Directly following that dark track, “Old Graves”, we get a more upbeat hip-hop tune featuring several other indie hip hop acts. “Incesticide” is riddled with amazing lyrics, both from Ceschi, and various other artists. “Way way too many Kanyes / Not nearly enough Ian McKayes” and “Indie rap underground is cesspool / All them fools on the spectrum not cool / Quit this shit before failure concludes” display the common theme each of the song, despite who is singing, and in the end, Ceschi spouts “Fuck wealth, don’t need it.” Before this track, I couldn’t really understand why an artist on the upswing would be wanting to quit what he had been doing his entire life, but the the track explains it well.

At 21 tracks, there is no way I could possibly do each song justice, but I will touch on my favorite track, “Animal Instincts”, an in your face hip hop track, with an insane chorus, and even better verses delivered by both Ceschi and several others. Surprisingly, it is the first time on the album, which is full of guest appearances, that I found the other rappers a bit more enjoyable than Ceschi himself, but Ceschi doesn’t seem like the kind of artist who would want to bring on guests that couldn’t give him a run for his money.

Throw in a little reggaeton, a quick cover of Britney Spears (in an unusually beautiful way), a remix of Sad, Fat Luck’s “Electrocardiographs”, a dark electro-pop track “1988”, and the kitchen sink, and you have this second installment of Ceschi’s final trilogy. Ceschi seems to put everything out there in this album, and I cannot think of another artist who could put electro-pop, hip hop, folk punk ballads, and reggaeton all on the same album without making a colossal mess, but Ceschi did it. The album flows, somehow, from track to track displaying a versatile artist that really is unparalleled.