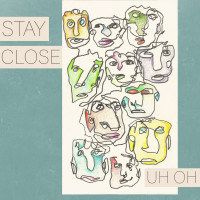 The album slowly builds with the (very short) starter track, "Woah," painting the band's landscape of early Weezer guitar feedback and dueling male/female vocals from guitarists Joe Champion and Mari Crisler. The intro song is sewn directly into "Desperate," bringing an increase in energy and an addicting single guitar lead reminiscent of Piebald or the Flatliners.

"Closer to Midnight" delightfully drags like a hungover Sunday afternoon, complete with earnest mentioning of vinyl and shower beers, and is a great departure from the energy level from the opener. "Broken Record" jumps right into a fun groove that nicely contrasts Champion's hopeless lyrics and gravelly delivery.

The band completely shifts dynamics with the slower "Hang On," introducing harmonica riding on a winding acoustic guitar riff. "Time Zones" is quite fragile, doting boxy guitar tones and opening up real estate for Champion and Crisler's paired verses.
"Tripping and Falling for You" and "True Blue" both hone on a relaxed and honest songwriting methodology, with the latter's blend of angst and fuzzy bass bordering on Ramones style punk rock if you look between the lines. "If You See Me" is a highlight on the album, with a dissonant guitar hook and more tragically romantic lyrics and melodies.

Stay Close dwindles shut with the dreamy closer, "We'll Laugh Again." The shoe-gazer, mirroring Nada Surf or Car Seat Headrest, safely drifts the listener into completion. The album is a nice listen, as Uh Oh continues to harbor their diplomatic interpretation of indie punk, setting them aside from those in the genre's overlaps that take themselves too seriously.

Out of System Transfer: From a City by the Sea