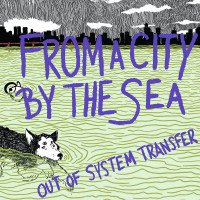 Out of System Transfer

I make this comparison to set up what they’ve done on this EP. While they aren’t being altogether goofy, their music comes across as fun and welcoming, and less aggressive than the traditional anarcho-folk punk scene, where song after song is demonizing the modern world or painting a grim future for the human race. OST found a way to take the musical stylings of their predecessors, and take out some of the seriousness, while still delivering messages through their lyrical content.

The EP starts with the track “Halfway” led by the line “Could’ve sworn I woke up with my foot on the gas”, and that lyric serves as the perfect metaphor for what to expect from the EP. It starts with a bang, and pushes through 6 tracks as quickly as it started. The two main vocalists do a great job of bouncing sounds off of each other, while still harmonizing throughout most of the choruses. They almost become cartoon characters, as they paint pictures of their life on the road.

The second track has some of the most humorous lyrics I’ve heard in some time. The band describes all of the ways they will “welcome” the agents when they come to their town. With “Flowers, … in flower pots” and with fresh pies baked with “apples, cherries, pears and cyanide.” If that weren’t enough, the chorus is a toast to others “welcoming” the agents to town, requesting that their barmate forget their face, “but if you want to (them) a drink, you can make (theirs) neat”. “Make mine Neat” might be my favorite track of the EP.

If it isn’t my favorite track, then the cryptic “S.O.A.S.O.B.” would take its spot. I must admit, I’m not completely sure what they are singing about, but I have let my imagination explore the lyrics a few times, and I’m honestly happier not knowing; it isn’t the lyrics that matter in this song. The melody, the horns, the battling vocals, the… everything, comes across so well done, and then the catchy sing-along style chorus hits. The sound of this track washes over you like a wave of manic orchestration. Each note from each instrument are meticulously placed together to deliver a comprehensive sound rarely found in acoustic bands.

The whole EP really is a breath of fresh air to this genre of music, and its often dark and dreary subject matter. OST aren’t the only ones trying to have fun with the music, but they are definitely one of the better groups putting together works like this. While the messages and call to arms that are often prevalent in this genre are important, and the primary foundation of the genre as a whole, I can’t imagine a world where punk became what it was without the goofballs in The Vandals, and I can’t imagine where folk punk would go without someone bringing some light-hearted humor to it, and OST do that well.