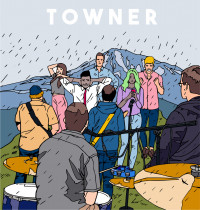 Towner is a new quartet from Ann Arbor, Michigan, and they just dropped their self released, self titled debut EP. The four catchy tracks draw mainly from classic ‘80s and ‘90s alternative and college rock. The inevitable comparisons would be The Pixies, The Replacements. Husker Du and maybe some Lemonheads. There’s some janglyness, some grunginess, some power pop, and even some garage rock. There’s not a ton of the Stooges/Cult Heroes style proto-punk that you might associate with Ann Arbor, but those type of bands were always outliers in a college town. While not punk per say, there’s still plenty to like about these four Towner tracks.

Opener, the Pixies like “Freaks in Common”, starts off with a fuzzy, droning, repeated chord, before the singing kicks in. The rhythm section starts up soon enough, and there’s even a clapping section in the middle. “These Worlds Are Yours” is the most memorable song on Towner. It’s sticky sweet, but ramshackle chorus will almost certainly get stuck in your head. “Calm Down”, ironically, is the most agitated song on the EP. It’s got driving beat, and the raunchy bass line leaps right out of the mix. Closer, “Moving Target”, the longest song at nearly four minutes, is another solid tune that reaffirms a strong Replacements influence.

Towner are a little rough around the edges, probably by design. The lead and harmony vocals are both just a touch off kilter. The guitars and drums have a certain jaggedness too. If raw sounding indie rock is your thing, you should definitely check out Towner. It might just be unpolished enough for some of the punk crowd too. Towner is off to a strong start with Towner.

Out of System Transfer: From a City by the Sea