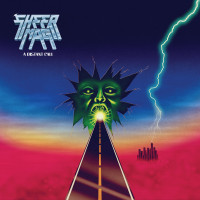 Sheer Mag are an enigma in today’s music scene. After a collection of grimey rock ‘n’ roll EPs about gentrification in Philadelphia’s Point Breeze neighborhood gained traction, they were suddenly on the tip of every music writer’s keyboards. The releases set the groundwork for Sheer Mag’s proper debut Need To Feel Your Love which saw the band incorporating funk and soul. It’s not many bands that can tour with acts ranging from Downtown Boys to Tony Molina to Power Trip with that background, but Sheer Mag are relentless road warriors who tirelessly win over new fans with their live show.

Enter A Distant Call. Sheer Mag’s new release sheds some of the expanded elements found on Need To Feel Your Love for a more narrowly focused effort. In that sense, the album straddles closer to their original sound of rock, power-pop, and metal nostalgia. Guitarists Matt Palmer and Kyle Seely drive the music with Palmer generally playing more rhythmic and clean guitar overdubbed with Seely’s fret-surfing melodies. Sheer Mag are never one to avoid a well placed killer guitar solo which you can notably find on “Blood From A Stone” and “The Killer.” The chunky riffs in “Chopping Block” are not to be missed either.

A Distant Call is described by the band as a cohesive character arc tying the album together. The lyrics are a fictional retelling of Halladay’s dealing with a death in the family, loss of a job, and break up all at once. As always, class war imagery is splattered throughout the lyrics. “Silver Line” name drops the #55Strong teacher movement with Halladay singing “There’s a picket line in West Virginia / The bosses cave, wildcats continue” comparing their collective success to the ineffectual strike of one via being fired without a union contract. The 80s post-punk of “Hardly to Blame” keeps thing local for Sheer Mag, name dropping the intersection of 15th and Moore Streets in Philadelphia with Halladay noting “I’m having some trouble / Because all I see are landmarks of you.”

A Distant Call ends on a familiar note with “Keen On Runnin’.” Fans of the band will recognize the song as an intro riff Sheer Mag has previously opened up with before launching into their set on tour. The inclusion of the intro riff sums up A Distant Call nicely. Years of hard touring has solidified what Sheer Mag do best and the band seem comfortable in that stance even if you've heard it before. A Distant Call will continue to allow them to be an enigma in the rock scene winning over any audience that crosses their path.