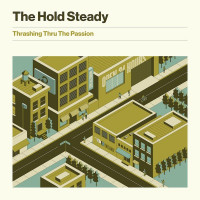 Thrashing Through the Passion (2019)

Yesterday (if this review runs when I think it’s going to) you would have seen my interview about why I picked The Hold Steady’s Boys and Girls in America as my top album of the 2000s. Not only is it my favorite album of the 2000s, but every album they put out in that decade made my list. I am a huge fan of theirs, even the albums Heaven is Whenever, which got a two-star review on this site, and Teeth Dreams, which is hardly a fan favorite. I don’t care. I have loved every single album they have ever put out. Unfortunately, that is, until now.

I’ve felt like The Hold Steady have been circling the drain in the 2010s. The gaps between their albums have become longer and longer (four years between Heaven is Whenever and Teeth Dreams, five years between Teeth Dreams and Thrashing Through the Passion) while Craig Finn has seemed to focus on his solo career more and more. In the past few years, the band’s output has been limited to mostly a series of poorly publicized 7” singles, which is primarily where Thrashing Through the Passion comes from. The album is mostly a collection of singles and b-sides from the 7”s they’ve been putting out these past few years, such that, even before the album came out last week, you could pretty much piece together an advance copy of the album for yourself out of their 7”s.

It’s not that this is a terrible album by any means. This is their first LP as a six piece band as, after keyboardist Franz Nicolay left the band, the rest of the band chose not to replace him with another keyboardist but instead with guitarist Steve Selvidge. But when Nicolay returned to the band, they kept Selvidge and simply expanded to a six piece band. All six members are incredibly talented and they know how to navigate the extra member. So the album is certainly technically competent. Likewise, there’s no such thing as a Craig Finn song without excellent lyrics, so the band’s trademark dense and vivid storytelling remains in tact on this album. No, my problem with this album is that it just fails to really capture my attention.

Around the time Teeth Dreams came out, I remember hearing the band doing an interview where the interviewer said that he liked that, as the band got older, their sound remained hard and loud instead of mellowing out. Well, those days are over, as Thrashing Through the Passion is easily the band’s softest album to date. Where most Hold Steady albums fill the room with sound, there’s a lot of quiet and negative space on this album. While the band’s other albums wrap you up in an awkward hug of emotions and drag you through to a catharsis, this album is passive and, despite the title, invokes very little passion in the listener. I was shocked when the band released the lukewarm song “Denver Haircut” as a single, but sadly that song’s lukewarm style is very representative of the rest of the album. The only songs that excite me as much as this band did in the past are “Entitlement Crew” and the last track, “Confusion in the Marketplace,” continuing the band’s tradition of churning out outstanding closers on every album.

As much as I wanted to love this album, it simply falls flat for me. I’m glad the band has expanded to six members, but I still want the fuller sound I’ve come to expect from The Hold Steady. I hope the band continues to increase its output in coming years, though, and I really hope that I’m wrong about them circling the drain.