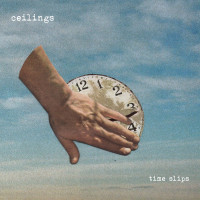 Ceilings are yet another promising band fresh out of the Winnipeg punk rock scene. The band is made up of members of other working Winnipeg locals acts Elder Abuse, Sit Calm, Witchtrip and Nice Cops and have just dropped their debut LP titled Time Slips.

Ceilings offer up a driving mid-tempo punk style with the ever-popular 90's alternative/grunge influence. While it seems that this particular sub-genre of music may soon be going by the wayside in the future, Time Slips is catchy and memorable and significantly better than the status quo. Ceilings seem to skip over some of the pitfalls many new punk bands fall prey to with Time Slips, which is likely attributed to the members long standing history of jamming together in various other projects over the years.

Time Slips comes out of the gate strong with "Set Sail". The song is immediately catchy and memorable as vocalist Trevor Buckley croons over top of droning and engaging riffs that feel like they could fit on a new Citizen record (or maybe an old one for that matter). The rest of the album ebbs and flows nicely with a few more note worthy songs sprinkled in including "Play it Off" and "Give Way". The album ends with the relatively silly, and previously recorded track "Jammin'", which while fun, can quickly become redundant in comparison to some of the more mature material found within Time Slips.

Ceilings may not have created a masterpiece with Time Slips, but they have succeeded in creating a solid and fun album that is worthy of repeat listens. My single complaint is the evident varying depth and content of the 8 songs. The few extremely strong tracks unfortunately shed light on some of less memorable moments by comparison. With only 8 songs making up this record I would have liked to see a few more new bangers and a few less re-records from the bands previous EP. That being said, Time Slips is an album worth of your time.

As a random aside - Ceilings recently lost all of their gear and merch in an art warehouse/jam space fire this summer. Hit them up and show them some love!

The Hold Steady: Thrashing Through the Passion

Spanner: We Won't Be Stopped