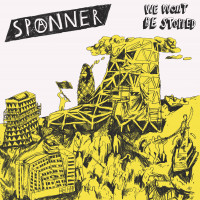 Tasteful anarcho ska-punk in the classic British tradition of the earliest works of Chumbawamba. Hailing from Bristol, Spanner wallop their horns out from your stereo with clear intent, sharp wit, and infectious songsmithing on their second album We Won’t be Stopped. The brass work is well utilized and just askew of center stage for much of this carnivalist, revelrant record. It’s an artful approach to brandishing and taming the anger spilt across the musical landscape of political punk, a statement of defiance and vision in contrast to their contemporaries, and a proclamation that they don’t need all the noise or distortion to harness our anger into a political movement-- that speaking with honesty and clarity and the promise of working toward a better tomorrow is all the hope a rebellion needs to thrive.

The ska elements are handled deftly and, as I’d characterize it, decidedly British; understated as a caution against oversweetening the composition. It’s a much more second-wave flavor and a couple great tracks swirl around a dollop of Dub. The overall effect is a very effortless attitude hanging above the tracks, utilized intrinsically in the songwriting and indulging terrifically melodic chorus craft.

The agenda for this record is jam packed with social ails and their prescribed punk rock remedies, and to accomplish all we aim for on such inspired anarcho releases such as these we’re treated first to an opening track setting the tone for our work ahead, and by time we wring out our runtime we’ll have an honest road map to getting our hands dirty. We Won’t be Stopped sees many tempo changes throughout the album, but Spanner hit their finest stride at a nice mid-tempo. On a track or two the band is a bit too quick footed for their heads and hands and show some cracks along the way; see "Above it All" for a band stumbling through a time signature. Do be sure to stick around for the immediate compensatory piece, the terrifically slowed down and perfect example of a low-tempo ska ballad "Chagossian Heartbreak". Heartbreak is an apt signifier, regarding its lyrical sorrow directed at colonialism’s generational impacts on Africa and her people. A couple constants through the first-half’s change-ups being the hollers from the rear of the stage and the male and female vocals often sharing the mic at the same time, creating a festivitous air about the proceedings.  "Impossible" accomplishes the timeless ska illusion of crafting a horn riff that feels as though you’re just now dropping in on a melody that’s been blowing for eons before you came along to it, familiar and long-toothed even upon first listen.

The second half of the album (well, the portion on the other side of ‘The People’s Trial of Jeremy Kyle’) does start to drag on a bit, but does so in a comfortable groove reminiscent of when the big name first-wave punk bands mattered. Not every lick and line are as clever as the band would sell you on, there’s some clumsy writing structures, uneven syllable sorts, and a bit of lyricism that comes on as cheesy a time or two. As easy as these are to highlight or dock ‘em points for, these instances are just more endearing evidence drawing them closer to their influences; Chumbawama and The Clash were never completely clear of similar criticisms of hokeyness or cornball tendencies.

Brilliant closer ‘Cadet Cops on Fire’ is an excellent and inspirational outro, featuring spoken word over nontraditional instrumentalism, striking the perfect chord of forward movement and introspective action while providing for a space-clearing exit from the album that ensures you don’t escape the album’s ideas. This is the audio equivalent of handing every attendee an activation pamphlet on their way out the tent, a call to continue the search and evangelize the message out into the world. It’s an imperfect mobilization anthem crafted from a rich tradition with an ear to our past but an eye to our future.

Humble Beginnings: Overanalyzing the Manifestations of the Unconscious (2018 Reissue)