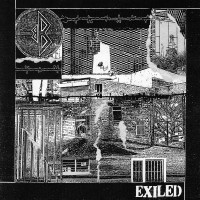 The third album from the UK’s Bad Breeding is a straight-forward, full-speed, anarchist hardcore no-bullshit punk record. With this album you’re looking down the barrel of a freight train of anarcho punk hallmarks, particularly the bass-driven locomotion and the vocal stylings and delivery, which are very much of the traditional ilk (it’s never actually quite screaming on these records, is it?). Baked into the recipe Bad Breeding’s concocted on Exiled is also a meaty vein of noise rock running from snout to tail, inflecting wildly from forestage to backstage upon the piece from movement to movement.

From Stevenage with hate the title track is first up on the docket, a solid confidence play that reinforces that the band knows which foot is their strongest and how to kick it way out front. “Raking Through the Screed” soon follows, one hell of a song, a fast and aggressive mover, one that’s all sharp elbows and high knees. Not lost at all in the milieu is a basecoat of very steady drumming, the weighted anchor that keeps this contraptions’ toes nailed to the bare floorboards. One of three early release tracks, “Theatre of Work” is an excellent deviation from these classic anarcho stylings that shows off an impressive creativity within a well-established sound, marking it as a standout on repeat listens. “CSAM” follows, jumping atop the nearest tabletop as a cacophony of noise. Near the end of the album there’s my favorite song on the record, the bass-y stomp of “A Rag Hung Between Two Trees”, bearing heavy fisted snare work harkening the most rousing works of Crass and Subhumans. I enjoy much less the seven-minute finale at the ass-end of this album. It’s by far the longest bit on the record, and for my ears, the least interesting as well. Repetitively jamming on stagnant riffs as though we’ve got all day to get out and change the world belies the hard-earned immediacy of the previous 11 whoppers on the tape, deflating the urgency and call to action within its message.

It’s a heavy slab of punk, but not as inaccessible as some publications are peddling it as. Beneath the swirling guitars, the cocksure drumbeats and militaristic snare workouts, and the wailing of our messenger, there is a lot of good groove hidden in these tracks. Exiled is rebellious and defiant, and just past a thick veil or filter of noise it’s not nearly as dark as it may appear on a first listen, an arthouse projection, painted with light, to depict darkness. The enclosed essay speaks of the need to ‘keep your hate pure’, and about the importance of untainted values, harnessing this sense of justice as a force in the world, that ‘Hate is the only energy that can sustain you in increasingly brutal times.’ This is your light depicting darkness. Using an ugly and brutish manifestation of your energy to illuminate the path toward the light. That this Hate is an expression of love. Beneath all the murkiness and cloudiness and the silt of our society you’ll find a beautiful anarcho-hardcore album here, if you just allow the light a path to the riverbed.

Humble Beginnings: Overanalyzing the Manifestations of the Unconscious (2018 Reissue)

The Lillingtons/The Eradicator: Live in Chicago