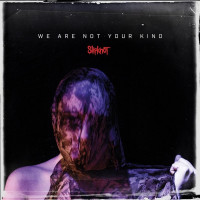 If, like me, you have not thought about Slipknot since you were 12 and your local college radio station would occasionally play “Wait and Bleed” while you were driven to basketball practice (shout out to WBER), and if, like me, you would have gone right on with your life not thinking about Slipknot save for an article in the New York Times (shout out Jon Caramanica), you might be surprised to hear that Iowa hard rock act has a new album out. You might be surprised to hear that this new album, We Are Not Your Kind, debuted at 1 on the Billboard chart (!) and that it is the band’s third album to hit number 1 on the chart (!!!) in its 20 year (!!!!!) career.

Let those very long sentences serve as a word of warning for the rest of this … well, shoot, “review” probably isn’t even the right word. “Check-in” might be closer to what’s going on here. I am not an authority on this group of masked apocalypse rockers, and to position myself as such would be a disservice to us both. I know that dudes on my football team in high school really liked Iowa, and I am vaguely aware that the band has soldiered on and prospered while many of its nu-metal / active rock brethren from the early 2000s have moved on to greener pastures (or, if you’re the guy from Staind, a country career). That legacy - the legacy as “last band standing” for the last-gasp as rock and roll as the dominant cultural force - is curious, and not only because, in case you forgot, this is the band with the masks.

But clearly, something is working, and it doesn’t take long for We Are Not Your Kind to justify the longevity. “Unsainted” is both the album-opener and the lead single, and it holds the key to a pattern that works for the band on the rest of the album; get nuts on the verses, get catchy on the choruses. Blasting drums and growling rap-screaming gives way to a shockingly tuneful, catchy chorus. “I’ll never kill myself to save my soul … I didn’t come this far to sink so low … I’m finally holding no to letting go,” the song goes, and … hell yeah, brother.

That back-and-forth, measuring screaming and collapse with clean and melody-forward choruses, isn’t all that much different that the quiet-LOUD-quiet dynamic that drove much of popular rock in the early 90s. The mood is dour, the speed is hyper, the low-end is pummeling, which makes sense for a band with anywhere between one and three percussionists at any given moment. That bottomless bottom is especially effective on a song like “Nero Forte,” which feels like you’re falling down a well, except the well is made of floor toms.

Beyond that, you might be surprised how varied and dynamic much of We Are Not Your Kind can sound. The DJ scratching is still here – there it is, hanging out on the end of “Birth of Cruel,” like a goofy skull-shaped ice cube in a bowl of Halloween punch - but it’s welcome and anachronistic in the context of 2019 (I mean, where else in popular music are you going to hear scratching and cutting? Not in rap). Things get really spooky when they slow down. Songs like “A Liar’s Funeral” and “Spiders” build real, creeping atmosphere with their restraint. On the whole, vocalist Corey Taylor fares a bit better screaming than he does playing it clean, but he sells the material and goes a long way to driving the emotional direction on the album.

Which … look. You don’t need me to tell you what’s going on, lyrically, with a Slipknot record called We Are Not Your Kind, with song titles like “Death Because of Death” and “Not Long for This World” and, again, “A Liar’s Funeral.” The palate here is pain, and us-against-them rallying in the face of that pain. Honestly, that’s a great lane for a band that spends a lot of its time trying to sound like they’re stuffing you into a box made of saw blades. What’s really shocking is how pleasant and enjoyable the saw blade box feels. Whatever remains of hard-rock for the masses, it feels safe in Slipknot's hands.