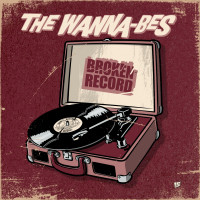 Back in the 1990’s, Lookout was putting out Ramones-inspired gold by bands like Screeching Weasel and the Mr. T Experience. I was looking for more of that. One of the bands that got my ear was the Wanna-Bes. They kept me happy for a quick minute with a fun self-titled record on Panic Button in 2001, and a demo for a follow-up, to be called Out Went The Lights. Then everything seemed to go quiet. They’ve since reemerged, releasing the finished Out Went The Lights LP in 2017, and now this EP, Broken Record.

On Broken Record, the Wanna-Bes sound positively energized, hanging tight to the Ramones/Lookout-paradigm and fondly reminding me that great songs can be absolutely simple. The first three songs all go by with a similar pace, familiar chord progressions, lyrics about relationships, and fantastic melodic vocal lines. My favorite, “I’m A Drag”, has a guitar riff that sounds ripped from the hands of early Green Day and vocals that are catchy as all get-out. I think this must be what would’ve happened if bands like the 1910 Fruitgum Company had more drive and distortion pedals and lots of caffeine. One of my favorite songs so far this year by anyone. And it’s done in a minute and a half (fitting one of my personal tenets: cut the glut, fill the song with goodness, and get out before it gets stale). The first song, “Broken Record”, is also great. It’s got a real driving guitar, alternating with a slightly stuttered riff during the bridge. It sounds really familiar and I kept listening again and again trying to place it, but never could. If anyone recognizes it, let me know so I can sleep a bit easier. The vocals are clean and melodic and will get you singing along after only a listen or two. Actually, same goes for “Talk To You”.

My only real complaint on this record comes on the last song, “Hangin’ On”. This one is a slow-to-mid-tempo sort of song where the verses and bridge just kind of drag. The chorus is terrific, though. If you can make it through the verses and bridges, the chorus is all pay-off. On balance, the song’s easily my least favorite here. And at three minutes in length (much of which elicits a shoulder shrug from me), it most flagrantly violates my personal tenet mentioned above. Still, since it’s at the end, I can check out early on days I don’t have the attention span to make it to the chorus.

When all is said and done, Broken Record is a pretty terrific listen. The music is simple. The energy is infectious. And the songs are mostly great. The Wanna-Bes are back and hopefully they’ll keep giving out some Ramones-inspired goodness.

Slipknot: We Are Not Your Kind