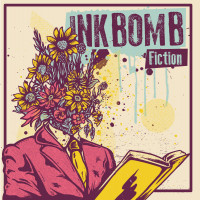 Dutch punks Ink Bomb have been doing their thing for 4 years now. And that’s resulted in a plethora of singles and EP’s, but this is their first full-length. It’s a pretty brief record, with 6 of the 11 songs clocking in ‪at 2:00‬ or less, but that’s par for the course for these guys.

Ink Bomb trade primarily in up-tempo, jagged punk rock that, at times, can really fly out of the speakers at you. At times when listening to the record, it occurs to me that independently, some of the riffs and vocal melodies could easily come from bands vastly richer in years than these guys. But that’s certainly not to say that this is the complete package, sadly. Although the DIY feel is present and correct, there is a slightly clinical feel to the production and mixing of the record that makes it feel somehow less analogue and human than I would have liked. It also feels somewhat at odds with the otherwise garage-y feel of the album.

Nonetheless, the songs rattle along pleasingly and some of the tracks have low-key anthemic qualities to them (the outro to “Midnight in the Desert”, the intro to “Griefwalker” that also serves as the song’s pre-chorus/chorus). “Sternschanze” with its dual-language approach (not sure if it’s their native Dutch or more likely German given the song and its title refer to a boho/hipster area in Hamburg) certainly adds something and the guitar solo smack bang in the middle of the track is very welcome, despite feeling slightly out of place initially. “Scourge” tackles the rise of the far right in a borderline jovial fashion, and with potential singalong lyrics aplenty. The only track on the record to break the 3-minute barrier is “Cauterize”, an acoustic lament that actually stands out as one of the record’s highlights. Not often the case for the sort of track that can sometimes feel like a tick-box exercise. The vocal harmonies, the warmer, more natural production and the clarity of songwriting really shine through, making me keen to know if the band have more of these in their locker.

From a vocal perspective, Joost Hoedemaeckers sits somewhere between ‪Mark Hoppus‬, ‪Greg Graffin‬ & ‪Mike Herrera‬, which is not a bad place to be and helps things feel familiar right from the off. He’s also no slouch when it comes to lyricism, albeit without necessarily re-writing the book. The band are also hot on syncopated rhythms and unexpected structures which keeps things interesting musically, too. What I would say, is that their approach to finishing their songs could definitely do with some development. There are too many times on this record where a song just finishes with no sense of actual resolution or culmination whatsoever. I don’t have a problem with abrupt endings, but in the case of this record it too often feels like songs that haven’t quite been finished, sadly.

There’s a lot to like here, but there are unavoidable elements that detract from the overall listening experience. The musicianship, lyrics/vocals are all of a really good quality. At times, it can feel not a million miles away from ‪the Lawrence Arms‬, in fact. However, at other times it can feel somehow detached; a little cold and overly spacious. It’s also hard to ignore that occasionally the songs’ structure works to the detriment of the ideas they clearly have in abundance. These are the sorts of criticisms that are likely to be levelled at almost all newer bands. I’m sure they’ll tighten these things up, get better and I’ll be really interested to hear what they sound like when they do. And for the record, I’m not suggesting they lose the weirdness that is innate in a lot of their music. That part I really like.