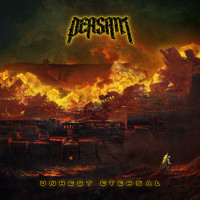 Hardcore can be a punishing genre. The fans are, in general, critical of stagnation yet suspicious of divergence. It’s a catch-22 for many bands. The past two decades of hardcore have been punctuated by a handful of bands that have successfully broken the mold without dropping out altogether. Huge names such as Strike Anywhere, Refused, Converge, and Fucked Up all immediately come to mind.

On their newest release, Unrest Eternal, South African hardcore outfit Peasant sets out to test some of the boundaries of the genre. After a string of EPs and singles over the past few years, the new LP represents the band at their most expansive and evolved. While their older material was always quality work, Unrest Eternal finds the band finally reaching their full potential.

The album springs to life in a fit of feedback and a sludgy drone before blasting to full speed on “Life’s End”. New frontman, Adri Jordaan, more than proves himself by the time the opening track has come to a close. His array of screams, roars and bellows do well to keep everyone on their toes and his energy and enthusiasm seems to have infected the rest of the band as well.

Musically, the band has continued to expand their sound into a cornucopia of all things heavy; hints of death metal, grind, thrash, and other niche genres peek through a solid foundation of hardcore punk.

The band tinkers around with chunky chug-chug guitars, speed metal drumming, and a healthy dose of blast beats on mosh anthem “Roots”. While the whole album is moshpit certified, the true test of endurance would have to be “Destined to Dirt”. The whole song is barely over two minutes but it roars and rips at full speed for every second.

The crowning achievement of Peasant’s new and expanded sound is the crushing title track. “Unrest Eternal” paints an epic soundscape with apocalyptic brushstrokes. It plods and builds and burns.

While Peasant doesn’t quite break the hardcore mold with Unrest Eternal, it certainly pushes it to the limit. Musically and production-wise, the band has really hit their stride. With their line-up fully stacked and their sound fully fleshed-out, it’s hard to predict what the band will do to follow this up. But for the time being, hardcore, punk, and metal fans can enjoy Unrest Eternal in all its glory.

Benny and the No-Goods: Nothing's Cool

Dan Vapid and the Cheats: Three