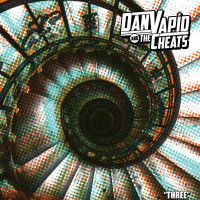 Dan Vapid has been around, playing in bands like Screeching Weasel and the Methadones, and more recently Dan Vapid and the Cheats. It’s fair to say he’s a bit of a luminary. Beginning with a self-titled debut and followed up by Two, the Cheats are now back with a new release, appropriately titled Three. And on this one, Dan seems to be in a good place.

Three is a Dan Vapid release, through-and-through. If you’ve been on board with him through the years, you’ll likely find much to like here. There are several great fast songs. “Silver Lining” has fantastic vocal melodies, nice “aah’s” in the background, and optimistic pick-me-up lyrics like “I’m sorry ‘bout what has come to end, but things will get better for you my friend” and “when darkened clouds above your head, obstruct the sun from shining, do your best to find the silver lining”. “Let Summer Work It’s Magic” doubles down on this standard, with nice buzzing guitars and lines like “everything is perfect where we are”. I like the positivity. “Bells In Maryville” is a quick one with a pretty traditional vocal melody, more harmonies, and some bells to begin the song. For simplicity sake, the song is pretty.

As Vapid does, there are also some nice mid-tempo numbers. “The Time We Get” has a cool bridge and some more invigorating lyrics imploring us to use our time well. “The Sky Is Electric Blue” has a bit of an Alkaline Trio feel to it and when the music drops out just long enough for the call of the title, you’ll likely find another song to revisit. Elsewhere, “Live A Little” has an early ‘60’s pop sound and an unexpected vocal line, some nice call-and-response “come on” vocals, and some well-used tambourine. “Bittersweet” has a bit of an odd vocal line that creates a nice juxtaposition against the guitars and bass, and again, it has some great “aah’s” throughout. It’s all in Vapid’s wheelhouse.

Three is a likeable record from Dan Vapid and the Cheats. It doesn’t hit me quite as hard as Two, Accident Waiting To Happen, or Not Economically Viable, but I’ll be coming back to it. There are some very catchy and memorable numbers, some satisfying pop songs, and a couple of decent ones. And there are no clunkers. It does a few of the standard Dan Vapid tricks, and does them pretty well. If you like his earlier work, you’re pretty likely to be on board for this one, too.