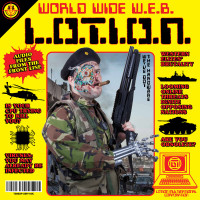 Despite the apocalyptic tone of the entire runtime of World Wide W.E.B., L.O.T.I.O.N. is clearly having a lot of fun. You can’t discount things like the cheeky album title or the cover which merges soldier of Fortune motifs with Terminator 2. There also seems to be some schizo-juxtaposition thrown here and there ala G.I.S.M. It all adds up to something amusing, but that’s only to soften the heavier message underneath.

L.O.T.I.O.N. make their trade in aggressive crust-synth punk. Vocalist Alexander Heir’s growl could fit on any Antisect, Misery, or Hellbastard album you can find. Meanwhile, the band blasts forward in an unrelenting hardcore charge while jarring and jagged synths rip and buzz and beep between the tracks. And of course, there’s the mandatory samples talking about air raids or preparing for governmental collapse, similar to a darker vision of Hawkwind’s “Sonic Attack.”

So, from one perspective, with the band’s gritty howl and robotic façade, the whole thing could come across as what 2025 might look like to a particularly paranoid doomsdayer circa 1982… except, is it paranoia when you were right? And that’s where L.O.T.I.O.N. makes their master-strike.

The band comments on being tracked by the government via covert surveillance (which is true). They talk about police forces ominously circulating the population for “protection” via aircraft (they do.) They talk about how nuclear missiles will destroy all of humanity and most other life forms (they very well could, especially with the dope in a red hat with the keys to the button). So, while the band is ensnared in a sort of early John Carpenter look, they points they are making are dead on and scarily relevant. Sure, these points have been made before by other punk bands- but because these horror stories are cloaked in what was formerly apocalyptic fantasy, but is now reality, there’s a certain gravitas and foresight here not heard in many records- you just have to look past the cyborg clutching shotgun on the cover. Even more, you could ask, “is this soldier a silly comic book fantasy, or a harbinger of what’s to come?” Before you dismiss the somewhat tongue-in-cheek affectations, go back and watch Terminator 1 and see how much was intended as make-believe then, but now is sickening reality…