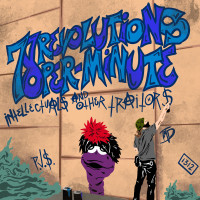 Intellectuals and Other Traitors (2019)

Put Out Your Own Records

I’m a little pissed at my old pal Tommy Gun. When I ran into him a couple months ago, he told me the new 78 Revolutions Per-Minute album was going to be 12 tracks and approximately 20 minutes long. In other words, a full length by punk standards. When I finally got Intellectuals and Other Traitors, it was only 8 songs and about 13 minutes long. Definitely an EP. What have I got against EPs? Absolutely nothing. I’d much rather have 10 or 12 tight minutes then a half hour of crap. It’s just that Grand Rapids is the EP capital of the world. Punk full lengths are hard to come by. When we do our year end best of lists, it’s the LP that’s most celebrated. The local scene ends up under represented.

Anyway, I’m not really pissed at Tommy. As a matter of fact, I always look forward to hearing what he’s been working on. It’s been interesting watching 78 RPM evolve. It started as a way for Gun to play his solo folk punk stuff with a backing band, but has since taken on a life of its own. The addition of a lead guitarist has truly made it a full band project. (And made them ¾ of local band Bet On Rats.) There has been significant musical growth since their debut EP, Here Lies a Mouthy Kid (2018). The lyrical focus of the band has shifted too. The inward looking earnest punk themes have grown both more political and light hearted. There are also more pop culture references.

Three of the tracks on Intellectuals and Other Traitors are around half a minute long, including opener and de facto title track “Annie Get Yer Gun, Duct Tape, & Matches”. (The other two are the almost metal of “Damnit Jim, I’m a Doctor Not a Punk” and “Kewl Kids”, both sung by bassist Dan Smith.) Like short records, I have nothing against short songs, but I wonder if these songs would have been more satisfying if the ideas had been fleshed out a bit. “6667” is a heartfelt song about people who abandon the scene. The title “Zombie - Cheerleader - Slumber - Party - Massacre” would seem to recall one of Gun’s earlier bands, Murder Party, but the title is a non sequitor and it’s pure 78 RPM. “Fuller (Go Easy on the Pepsi)” is an extremely catchy song that references Home Alone of all things. “Voila! An Instant Hit” speaks of the vapidness of popular music. Closer “Weekend at Bernie’s Me When I Die” is sincere and relatively self explanatory.

Musically, 78 RPM builds on its winning formula of combining pop punk, folk punk, rock and roll, and maybe even a touch of hardcore. Gun has a pretty unique voice, and so does Smith, who is a fine frontman in his own right. The backing vocals are on point. The contributions of new lead guitarist Derek Blossom noticeably beefs up the sound too. (Just so he doesn’t feel left out, Don Carlisle also does a nice job on drums and production.) If I’m being honest, 78 Revolutions Per-Minute has been one of my favorite local bands for quite a while now. Intellectuals and Other Traitors only helps solidify that opinion. Check it out!