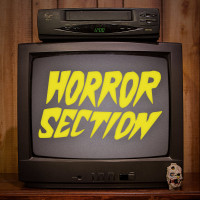 You’re watching “Evil Dead”. There’s blood everywhere, gore and chainsaws. And somehow you’re laughing. The camp is so strong that you’re not really scared, you’re just having fun. Horror Section is that in a Ramones/Lillingtons/Misfits sort of way on their newest self-titled record.

Horror Section is much like their previous releases, a mostly good-to-great set of pop punk songs with a lot of chances to sing along on songs about horror films. Songs like “They’re Inside” offers good pace, cool guitar leads, and a fairly obvious but singable chorus that tells a tale of impending doom and murder. Might be my favorite on here. “First Kill” also brings the guitar lead goods and is coupled with some ragged chanting backing vocals that add some edge and anxiety to a nerve-wracking track about misestimating someone previously thought to be incapable of killing. “Remains” is another highlight, complete with a memorable guitar hook, great backing vocals, an ominous lead guitar line, and words about covering up your criminal tracks and ditching some bodies. Yikes.

Horror Section also ponders issues of identity, perception, and angst. On “Are You There”, they offer up terrific vocal harmonies, delivering melancholy lines like “there’s no one ever there, I’m just talking to myself”. “Somebody Else” is one of those songs that surprises you with a startling vocal melody and cool stuttered backing music during the chorus that just worms its way into your head. Also, it’s got a pretty keen coda at the end. This could be my favorite, too, on any given day. One other choice cut, “Make Them Pay”, has a fantastic guitar hook during the verse and a nice singalong chorus. The guitar solo that comes in around the one-and-a-half minute mark is terrific, in and out real quick, and it fits nicely. It’s great stuff.

With this self-titled record, Horror Section has a fun and rock-solid record on their hands. Sure, you’ve likely heard stuff like this before, but that’s no reason to ignore Horror Section. It’s got a bit of darkness, a bunch of camp, good playing, and some nice vocals and harmonies. Horror Section is a great next step and a nice addition.