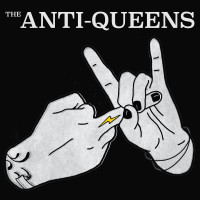 Toronto, Ontario’s Anti-Queens are back with a vengeance on their self-titled release, The Anti-Queens.

The mighty foursome solidify their sound and showcase their range without compromise or hesitation on all tracks of The Anti-Queens. Everyone plays with a fresh, infectious energy that makes you want to join in. The drums and bass are brighter and louder, creating a strong beat that varies from song to song. The bass is able to work perfectly with the guitars that play well off of each other to create a rich sound that sets the stage for the vocals. There are more vocal runs and gravellier deliveries, adding amazing depth and showcasing the emotion and power of the lyrics.

“Leave Me Out” is easily one of the most powerful songs on The Anti-Queens. The lyrics deal with the anger and frustration that comes with a breakup, especially when the person tries to bring you back into their life. The Anti-Queens make it clear that they are done with the person in question for good and will not let themselves brought back down by the one who did them wrong. The guitars, bass and drums have a defiant energy to them that stands well on its own and works perfectly to highlight the vocal delivery. This song features Emily Bones’ gravellier tones which gives the song more depth and makes it so you can feel the emotions deep in your soul. This song lends its power to anyone feeling down or in a rut when it comes to dealing with toxic people in life, giving you the strength to say, “leave me out of this”.

The Anti-Queens smash the taboo around periods to pieces on “Miss Scarlet”. The lyrics personify menstruation as a woman who pops up seemingly at random bringing nothing but pain and misery. The frustration with this monthly occurrence is no more evident in “I never wanted you around no/So stay the fuck away from me”. The vocal delivery is clear and strong, highlighting the anger that most women feel about this subject while also injecting a touch of humour that is essential to deal with any hardships in life. “Miss Scarlet” finally gives us an outlet to rage against nature and the unfairness of it all.

The Anti-Queens are an unapologetically powerful band. They work insanely hard to put out the best music that they can while staying true to themselves and their beliefs. They do not deserve to be dismissed or brushed off because of their gender. Bands made up of male members do not face this problem in the slightest. They are never told that they don’t belong in the scene and don’t have to deal with the stupidity of small-minded people who don’t listen to them for the sole reason of their gender. While this album won’t any open minds that are firmly shut, it will put to bed any doubts about whether or not an all-female band can rock hard.

Every element on The Anti-Queens falls into place without a hitch, with infectious energy that is off the charts as each song makes you want to sing and dance along until your body gives out. They have evolved their sound with every song featuring new arrangements. They are able to move seamlessly from Runaways-inspired “I’m Sorry Babe” to a more introspective look at the world on “What Do I Know”. Every song highlights a different side of the Anti-Queens and works together to create a memorable album that can be listened to on repeat. The quality of production is amazing with clear lyrics and no one element overpowering the rest. This album solidifies the Anti-Queens as a name to know and a force to be reckoned with.