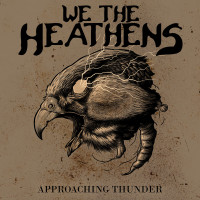 We the Heathens, hailing from Wisconsin, are the Thrash Metal version of a folk punk band. Dueling guitars, and I don’t mean acoustic any more, with a more traditional rhythm section, have put these boys on the outskirts of the current DIY Folk Punk scene, but they are very much worthy of their own genre, so I doubt it worries them much that they aren’t headlining Folk Shit Up or MudRunners festivals.

The eight song LP, Approaching Thunder, leaves little traces of their ties to the scene as it blasts off with “33 shots, a traditional thrashy punk tune, with guitar effects that conjure the feeling of a Slayer or Hatebreed, as they’ve moved to electric guitars. It’s a perfect start to the album, and leads directly into my favorite track “Crooked Kings”. The chorus displays the”ir punk roots, and for me, those cleaner vocals, and melodic 20 seconds, proves why these guys deserve all of the praise they get.

While all of the tracks on the album are re-recordings of classics, the album plays like it was an original LP, where every track was clearly, and delicately placed in its perfect place. This meticulous orchestration of the songs, allows for a new listener to feel like this album is not a “Greatest Hits”, while allowing their more tenured fans, a new way of hearing some of the best songwriting the Heathens have given us over their career.

Some of the later tracks, especially “Neurotic Decay”, bring to the forefront the Cello and Violin, the two instruments tying them Folk Punk scene, and while any, even casual listener, has probably already heard this tune several times, it sounds just different enough to give a fan a chance to enjoy it again. The clean vocals sound just a bit more clean, and the chants in the chorus sound more crisp, making it all that easier for a fan to sing along, knowing they’re not screwing up the lyrics. This is definitely their biggest “hit” and a fan favorite, so to hear it re recorded with the appropriate attention to detail in the mixing/mastering, really shows how talented the Heathens have always been, even before they had the opportunity to record in more professional settings.

If you’re a fan of the harder stuff, and have never ventured too deeply into the Folk Punk scene, this is definitely the album to start with: a carefully curated 8 song album of the “hardest” folk punk band in the scene. You won’t hear any mandolin,or washboard, but what you do hear is great, and worthy of the recent attention they’ve been getting in both the Folk Punk and traditional hardcore scenes.

Boris the Sprinkler: Vespa to Venus