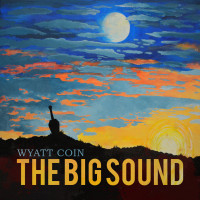 Wyatt Coin, a handful of cowpunks from Rochester, New York are releasing their newest Studio Album The Big Sound today, and I have to say that this day has been one I’ve been eagerly awaiting. Coin have the ability to fuse punk and country in a way few others can, veering from the more rockabilly acts like Tiger Army, and really creating a lane for themselves.


The album starts with a kicker in “Law Dogs”, and leave nothing on the table with the first track. The dueling vocals, and their fierce punk inspired country riffs rip through your ear drums, leaving you more than ready for the rest of the coming album. Coupled with the second song “Fighting Just to Win”, it's clear within the first six minutes, that there sound has matured over the course of their career. Don’t like country, don’t worry, it sounds like punk. Don’t like punk, don’t worry, it sounds enough like country. The blend is remarkable, and leaves us listeners questioning how such contrary sounds could be blended in a way that is being presented with this newest delivery of pure, fast, fun bangers.

They slow it down for a few seconds, just for the intro, of the third track “Up on the Ol Whiskey Shelf”, and it becomes more than evident that the themes in their songs (drinking and the repercussions of doing too much of it) are the reason this blend works so well. Tie that into the commonality that continues to arise, perfected with the line “I’ve been thinking too much, lately, that my baby’s gone”, proves that these two normally conflicting genres really aren’t all that different. The guitars, both in this third track, and through out, have that twinge of Johnny Cash or Hank Williams, played about thirty times faster than the “good ‘ol boys”, which add to these “good ‘ol boys” ability to blend these sounds so well.

The rest of the album continues in this same fashion. Towards the end of the album rests my favorite track "Guttertheft". It starts with some nice work on harmonica, slows things down just enough, and exudes the darkness that I'm generally looking for in a great song. I guess I was meant to be a goth, but for me the strongest emotions are generally negative, when it comes to perfecting a song.

The album isn’t going to win any awards for groundbreaking work, but it is a very fun album, for those who enjoy punk being blended with other genres. Myself, normally getting obsessed with the folk punk scene, found it a welcome vacation from the, many times, less aggressive and more depressing than the more active bands in the folk punk scene. It was fun, and had a multitude of instrumentation that has drawn me to the folk punk scene. Coming from Texas, and having been raised on country music, I wonder why more artists haven’t found a way to break these types of barriers; unlike most country artists who’ve been trying to break into the “pop” world, these guys have found a way to play country music, but for a punk crowd.

We The Heathens: Approaching Thunder

Sixteen Scandals: Nothing to C Here