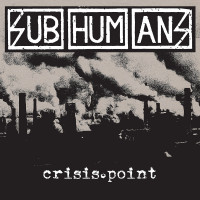 The most amazing thing about Subhumans new LP, is that it doesn’t really feel new at all. Crisis Point feels like it could have come at any point in the band’s impressive, nearly 40 year career. Part of that is no doubt due to Dick Lucas’ familiar voice, and his unique half shouted, half sung delivery. Another part has to be that Subhumans haven’t had a lineup change since 1983. That continuity clearly has musical benefits. Their rhythmic, propulsive, adventurous sound has never been bound by punk’s traditional three chords.

Then, of course, there’s the ambitious message. Those messages haven’t changed much since Ronald Reagan and Margaret Thatcher were on the receiving end of their wrath. Songs against authority and conformity never go out of style, no matter who the president is. While it’s tempting to call Crisis Point timely, it’s actually timeless. In truth, Crisis Point is a not so gentle reminder of why Subhumans are, and have always been a leading voice in the anarcho-punk movement. These words are important, and these words have power.

Opener “Terrorist In Waiting” has a fast, driving beat and a frightening message. The lead guitar on the only slightly slower “Fear and Confusion” is clearly emulating a police siren. “Information Gap” has a less traditional guitar riff, and questions what is really true in the age of fake news. The idea that the powers that be are lying to us is a common theme on Crisis Point. “Atom Screen War” seems to ponder the state of modern war, while “Follow the Leader” challenges respecting disrespectful authority. Both are punk ragers. Like all Subhumans records, Crisis Point is going to require the vigilant listener to spend some time reading and considering the lyrics.

“Strange Land” talks about the uneasiness that comes from the country you call home becoming almost unrecognizable. “99%” is a memorable anthem for the working class. “Punk Machine” mocks fake punk bands with the wrong motives. “Poison” is about how we’re killing ourselves and our planet. After a brief musical interlude, “Thought is Free” finishes things up on a high note. It might be the strongest song on a record full of strong songs. The idea being that no matter what happens, nothing is capable of enslaving our minds.

It’s pretty impressive that Subhumans can attack such familiar subject matter without coming across as cliché or insincere. In fact, they seem as genuinely pissed off as ever. Even with the words being as powerful as they are, the music is still able to match their intensity. It’s difficult to find any significant fault with Crisis Point. It’s smart and it rips. It’s timely, timeless, and will no doubt be among the year end favorites of most aging punks. Hopefully a few of the younger generation will discover them too. SUB HUM ANS. Now more than ever.