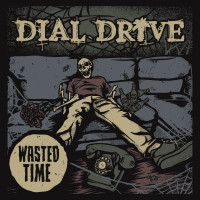 There’s a line in Dial Drive’s streaming bio that reads, “Combining their favorite influences, they released their debut EP, Never Go Home, in 2017.” Most would just pass over this seemingly obvious and almost useless piece of information when reading about a band and their records, but after running through Wasted Time, their 2019 full length, those four words that begin that sentence are ever so glaring.

It’s one thing to craft your sound from your influences, but it’s another to directly integrate distinct sounds from your influences into your own songs. Dial Drive hasn’t found their own sound yet. On Wasted Time, it’s difficult to find a Dial Drive song, rather than a song written by Dial Drive that sounds like [insert band name here.] That said, these songs are fun, catchy and well-produced, but the record as a whole flows more like a collection of songs than an actual album. If you were to dive in to the ten tracks here without knowing it was a release from a single band, it’s likely you’d think it was just a compilation of various artists in the pop-punk spectrum.

Now, I can’t say for sure who their influences are on this particular release, but I can make a solid guess solely based on many of the songwriting elements throughout these songs. When writing Wasted Time, it’s almost as if their starting point was some sort of pop-punk database where they set the filters to 2003-2009 and suppressed all of the “scene” and electro-pop bands. “Missed Call” opens eerily similar to the darkness and gothic introduction to “Time to Waste,” (a strange coincidence to the record title here,) and “Parasite” just breathes a Dan Andriano led song, giving way to the apparent Alkaline Trio influence. “Better Off” is a straight Take This to Your Grave era Fallout Boy inspired song full of punchiness and crisp vocal delivery. The trends from this period of music continue throughout with easy-core beats and breakdowns, the bounce and back-and-forth of early Midtown and even some ambient, Leto and Delonge inspired riffs. Hell, there’s even some ska integrated in here, which surprisingly enough, supports one of the brightest spots on the LP in “Smile.”

As you can see, the record is all over the place in terms of cohesiveness, but it’s not to say that some of these songs individually don’t rip. The best tracks here are those where the direct influences aren’t that gleamingly obvious. “Going Postal” is the best example of this, driven by well-executed tempo fluctuation that delivers on power with a clean, pop-driven approach. This could be and should be the “Dial Drive sound.” Lead track, “Do They Know” strives on melding their influences without a blatant example or style similarity to that of another band.

Wasted Time proves that Orlando’s Dial Drive can write solid, borderline addictive songs that come from a place of endearment, but bring out the indecisiveness and hesitation of truly defining who they are stylistically. The talent is there in every aspect of the band, but where they miss here is in the actual creation of an album, both sequentially and singularity speaking, producing an output of songs spanning across too many elements within the pop-punk ecosystem.

Snuff: There's A Lot Of It About
Go to the review index