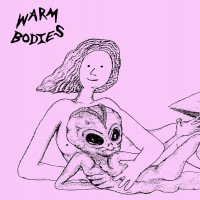 Warm Bodies is here to freak some people out. Coming out of Kansas City, Missouri, Warm Bodies wallow in the weird.

On UFO Extremo’s, Warm Bodies blows up anything resembling tradition. There’s really no discernible verse-chorus structure. The mutant guitar lines seem to weave in and out of the songs randomly, sometimes falling lock-step in with the music, and sometimes acting as though they are off on a completely different plane. Olivia Gibb sings with a confidence and swagger that comes across somehow as both innocent and cocksure (reminds me of Kathleen Hanna), and as she sings and rants, she is seemingly on the verge of coming unhinged and falling from the tracks. The only thing really seeming to hold the band together is the rhythm section, and even that is questionable. The drums rattle, thump, and hiss in between rapid fire fills while the bass does its level best to keep up and stay on pace, mostly successfully. And while all of this makes for a chaotic cacophony, it also brings the danger and keeps you engaged.

All four of these songs bring an intensity often missing in punk rock. “Blister Resister” is my favorite. It begins with a Boredoms-aping start, all found sounds, digital washes and buzz, and random distant vocals. The band then kicks in with a stop-and-go thing, making for a hardcore-adjacent rhythmic song. The guitar lines shriek throughout, lacerating ears and making all sorts of not-of-this-earth noises. They rise, they fall, they rabidly fall apart time and again before readjusting and coming back together. And the drumming on this one, it’s possessed. “Blister Resister” takes you on a journey, and even when it’s finished, you’re not quite sure where you’ve been to. Later, on “Time Slip’s Kiss”, Warm Bodies rides through a post-punk feel with copious amounts of hi-hat and a rhythm that is likely as close as they’ll allow themselves to get to danceable. Again, the mutant guitars worm their way throughout the song while the bass bubbles in the back, holding things together (albeit loosely), before the guitars stutter away to a digital buzz and wash as the song fades out. While I fail at making out the lyrics on most of this, at one point during this song, Gibb starts repeatedly yelling “it’s different” and I can’t help but think this to be the perfect manifesto for Warm Bodies.

On UFO Extremo’s, Warm Bodies does what it wants. It’s raw, it’s fast, it’s absolute chaos. When I’m listening to it, UFO Extremo’s feels like the soundtrack to the chaos of the mobs of people running through the streets of Tokyo, attempting an escape from Godzilla in one of the campy films from the 1950s. My head spins as I try to make sense of this. Truthfully, some will find this too nuts, maybe even unlistenable. And I can understand that. Warm Bodies isn’t for everyone, but I think it’s worth giving a shot.

Snuff: There's A Lot Of It About