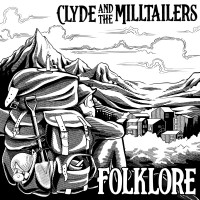 Clyde has definitely been busy this year, releasing Folklore only about a month after his most recent releases of several singles, and remaining an active contributor to several other projects, all while touring almost constantly. Clyde, and his ever revolving band of backing musicians, play a more traditional folk/americana style of music, than some of the other bands that have evolved from the Bridge City Sinners, and their constantly evolving band of side projects, but the music is definitely Folk Punk adjacent, and remains on most of my playlists.

Clyde has a voice that is incomparable to modern artists. His style on guitar, or banjo, when he is playing compliments his voice, and brings you back to a time when life was much more simple. His lyrics often remaining with that common theme. If someone had told me this record was recorded in 1958, in the Appalachian Mountains of West Virginia, and had just been discovered, I probably wouldn’t be shocked. He has that ability to conjure the old world Americana and Folk that inspired rock, blues, and country musicians alike, and left its impression on the world for half a century, and counting.

The violin/fiddle that leads the third track “Yaga” is perfect example of a songwriter/composer being born a few decades too late. It presents a perfect lead into a dark tune that literally caused shivers down my spine as I heard that perfect vocal accompaniment being layed out over traditional steel guitar, and swept back in whenever Clyde was not singing. Clyde’s voice, on this track alone, is not the star of the show, as that fiddle emotes so much emotion that it would be hard to top.

Every song sounds just different enough that I wonder if these were leftovers from Clydes most recent album, but despite the songs not sounding like they were written to be one unique piece of work, it's easy to overlook, as each tune brings with it something unexpected. While I prefer some of the other side projects of the Sinners a bit more than Clyde, most of the time, I must say that I was more than happily surprised with this release. So much so that it tipped the scale on my decision to go see him live here soon, and gave me a bit of school girl giddiness as I’m now waiting in anticipation of Clyde’s coming presence.

This album won’t be for everyone, and definitely falls far from the “punk” side of Folk Punk, but as a fan of a plethora of musical stylings, it hit very well with me, and I look forward to seeing what comes next from this project, and the others that he is often associated with.