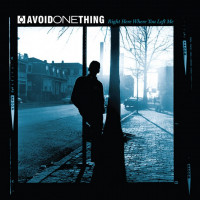 Seemingly out of nowhere, Avoid One Thing have released their third album. Considering it’s been fifteen years since their last release, Right Here Where You Left Me coming out within a week of its announcement is quite the turnaround. But rest assured, this is classic Avoid One Thing. And when you’re listening to the record wondering if it was released years ago, you’re not alone.

Joe Gittleman, along with guitarist Amy Griffin and drummer John Lynch, have not missed a step. This album sounds like the early 00’s in all the best ways. Gittleman, now fifteen years older, sounds as weary yet assured as he did in 2002. There’s almost nothing that changes the formula that worked so well all those years ago. Gittleman’s still a champ of exhausted lyricism about life’s pitfalls and now even writes some with a more uplifting spin (“Where We End Our Days”). But Gittleman has sounded tired since “Pop Punk Band,” where he was already an elder statesman in a sea of fresh Warped Tour attendees. He’s still penning catchy hooks that somehow act as the opposite of anthems. The title track proves that instantly while the rest follow suit. Somewhere between “Enemy” and “Fresh Pond Parkway,” there exists the next “Lean on Sheena” if that’s what you’re looking for. The few tracks that stray slightly from the formula work well. “Disassembly Line” is Replacements to the core. “Wanna quit your job? Well, join the club!” he sings. But usually, the change in pace is simply slowed down. “Good enough just isn’t good enough anymore”, he sings on “Shutting Down the Radar." This is the Avoid One Thing of 2019.

“Why try in vain, some things never change, it’s all the same to me…” Joe Gittleman decides relatively early on Right Here Where You Left Me. Avoid One Thing have now technically been a band for almost twenty years, while Gittleman has been at it much longer. Right Here Where You Left Me is a good album but, more so, feels like one Gittleman needed for himself. Avoid One Thing is so much his creative force and this album’s inability to show age is a testament to his timeless songwriting.