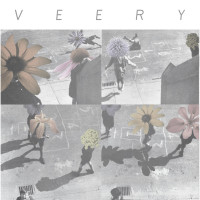 Veery was a band from Richmond, VA made up of Harris Mendell (Sundials), Chris Carreon also of (Sundials, Springtime, Large Margin), and Alex Wilhelm (Hold Tight!, Smoke Break). These three who have all made interesting music in other bands came together to create something really cool and different with this album. Since each member of the band currently lives in different cities and they never played more than a hand full of shows this short album kind of slid under the radar for most people outside of Richmond. The music is nothing like the bands each member has been in previously. While Sundials and Hold Tight are both more on the poppier side, Veery is heavy and hard hitting. The music is much like a blend of early 90’s grunge and Post-punk. Harris, who is also the singer in Sundials, is barely recognizable with his more aggressive approach and more shouty vocals. With that being said, this album isn’t one tone. Although most of the songs are relatively short they are all very dynamic. There are only six songs on the album, but they take you through a range of emotions. There are some slow and soft sung parts along with some very heavy and intense moments. The bass sounds fat and deep, very similar to Jesus Lizard. The guitar, at times shrieking and at others melodic, reminds of Fugazi or other Dischord bands. The drums are always on point and help tie everything else together with some precision rhythms. The lyrics, although not the focus, are packed with interesting word play and metaphors which are strung together in a way that blends perfectly with the soundscape. The words do not directly give away what the song is about, but give you enough clues to keep you interested. It impresses me to see the versatility of the members of this band. Throwing their influences together to make an excellent album that is out of their normal range. I really wish there were more than six songs to this or that there were some type of plans for more music, but glad this exists either way..

Yeesh: Saw You Up There