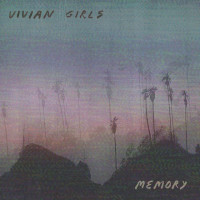 I mean, we all knew it all along, but the new Vivian Girls album Memory- their reunion record and first LP in eight years – proves that it wasn’t all hype. In fact, there may have been “hype” back in the blog-era, but it was incidental. As you recall, Vivian Girls were one of the first bands to catch via “cool music sites” and they shot to renown for their debut in a matter of weeks. After they created that phenomena, the also created the linked phenomena- the arbitrary backlash. As heralded as the trio was, they were just as soon attacked for the high crime of being themselves and recording distinctively Vivian Girls music.

But now, eight years later, which is about a century and half in Internet time, none of that matters. Not even a pinch. The reason is that now that Vivian Girls and everyone else are distanced from the creepy days of blog-net, their work finally gets to stand on its own without the benefit/detriment of centralized opinion.

Lucky for us, Memory is exellent. And equally for us, Vivian Girls are still basically the gals we knew a decade ago. Sure, they’ll a little older and probably more mature, but honestly, the early recordings never came off as immature of flippant- in fact, one of vocalist Cassie Ramone’s main strengths is her ability to convey a sort of cosmic knowing. That’s amplified throughout the new album.

“Sick” opens with a distinctively early Descendents vibe before Cassie Ramone’s hazy, oracle voice crashes down. As before a certain melancholy permeates the sound here, but so does a sort of understanding of the universe. This is duplicated on “At It Again” where Ramone seems to be giving advice to none other than herself from a clear headed perspective.

Bassist and co-founder Katy Goodman has been spending the last decade or so with her La Sera band, which traded in the gritty, buzzing Viv Girl sound for a more la-la-la-laaaa type sound and she brings those skills here. “Something to Do” has the earlier rough edges of the first Vivian Girls sound, but is given a fully body by Goodman’s rumbling bass which seems to warp between bounce and Sabbath style low smash (ala the wonderfully jagged “Sludge” which nearly veers into avant-garde with its screech attack).

See also Ali Kohler who keeps a simply, but hard driving drum smack. This is punk drumming applied to vocal styles that are perhaps more psychedelic than Ramones- and that’s one of the reason why this record sticks. All three VGs are working off ach other, utilizing and building off the other’s strength. As mention, “Sludge” is standout that that smashes it up and soothes in equal measure. Vivian Girls can be mean and nice, and sometimes both at the same time.

Memory had a lot riding on it- for once, the Vivian Girls could release an album without people waiting to pounce.. or flatter. Memory shows that all of the early magic really was magic. If you don’t believe me, check out the sinister drive of “I’m far away” which switches between the sinister bend of the best of East Bay Ray and the singalong style of the Carpenters. Yes, the Vivian Girls were and are good, but we already knew that. However, more importantly, Memeroy cements that NO ONE can do what this trio does and, more than that, they’re doing it even better now then they were before.