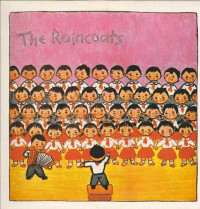 I was first turned on to The Raincoats because of the fact that Kurt Cobain had called them one of his favorite bands and ranked their self-titled debut album as number 20 on his list of his all-time favorite albums. Cobain also wrote an introduction for the liner notes on one of the album’s reissues, and had invited The Raincoats to open for Nirvana on their UK tour which was, unfortunately, canceled due to Cobain’s untimely death. Other admirers of The Raincoats included Johnny Rotten and Kim Gordon. Essentially, The Raincoats have always been a musician’s band, frequently drawing praise and outright adoration by members of rock’s royalty. The Raincoats are known as a sort of experimental post-punk band, but, for their first album at least, their music sounded like a sort of off-kilter pop music, made more interesting by the quirky instrumentations such as their inclusion of a violin. The album seems to get more and more experimental as it goes on until the penultimate track, “In Love,” descends into utter noise. For all their reputation as an experimental band, The Raincoats certainly know how to write a pop song.

The band’s first single, “Fairytale in the Supermarket,” was not originally part of this album, but a 1993 reissue of the album included it as the opening track and, thus, every reissue since has included the single as the album’s opener. Aside from the cryptic and intellectual lyrics and the unorthodox use of a violin, “Fairytale” is a pretty standard post-punk pop song. The album’s original opening track, “No Side to Fall In” takes that unorthodox violin playing to a whole new level and makes it a centerpiece of the song, yet it somehow blends in nicely with the other instruments and fails to be off-putting. “Black and White,” however, revolves around a screeching saxophone played by short-lived X-Ray Spex saxophonist, Lora Logic. But nothing on this album stands out as notably as the cover of The Kinks’ “Lola,” which turns the classic song into a fractured, lurching tune. The final track on the album, “No Looking” is actually a poem by Jacques Prévert that the band translated from French to English and then wrote music for.

The Raincoats are technically still together, although it’s now been over two decades since they’ve released a new album. In 2010 they performed this album live in its entirety for the All Tommorow’s Parties’ Don’t Look Back series. As obscure as this album is, there remain many people, including many influential artists, who remember this album vividly and keep its memory alive. Perhaps then it’s not so obscure, as it still retains a powerful legacy to this day.