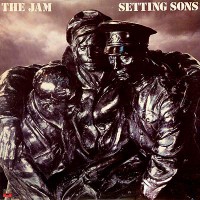 There was a time when The Jam was the biggest band in Britain, bar none. They rolled in at the time of punks inception in 1977 as disciples of the Kinks and American R&B. They spoke like the punks, sounded like AM pop-rockers, and dressed like models. In 5 short years, they released six Top 20 albums before imploding; all before any of the members turned 25 years old.

Following the huge success of All Mod Cons, The Jams fourth album, Setting Sons was released in November of 1979, and became the band’s best performing album to date.

Originally conceived as a concept album about three childhood friends who eventually all went off to war, most of the tracks on the final product actually strayed from that theme. While personally I don’t see most 20 year olds (except for those that actually have gone to war) having an easy time wrapping their heads around such a concept for a full album, the deviation ends up really not mattering much. The bands working class roots provided plenty of substance, and their intelligent word play gave them a maturity that nature hadn’t yet.

While All Mod Cons owed its mass appeal to its power-pop spunk, the band did considerably more experimenting on Setting Sons. This one was darker, both in sound and in content. Even with a spattering of orchestral strings here and there, Sons has a much harder edge than its predecessors, leaning as far into a traditional punk sound as the Mod culture got.

Not that that’s very surprising. We are, after all, talking about Maggie’s UK, one of high unemployment, shuttered factories, crime, and the ongoing Cold War. This, along with previously mentioned original concept, make for a perfectly timed coming-of-age production.

As such, there is a good bit of nostalgia throughout the record. “Thick As Thieves” is innocent enough, recalling some not-too-delinquent troublemaking with one’s childhood pals; while “Dreams of Children” explores a darker side of innocence: when it becomes lost.

Also being an angry, protest filled punk record, The Jam also spoke out on the scourges of the present day, which suited not only the UK of 1979 but also carry over to 2019. “Little Boy Soldiers” is a poignant anti-war song, one that pulls no punches in its scathing accusations towards the powers that be, nor in its naked sympathies on the perils of war. And on “The Eton Rifles”, the album’s only official single as well as The Jam’s first Top Ten hit, Paul Weller penned a damning narrative of class warfare and labor union demonstrations turned violent.

Setting Sons may have sealed The Jam as a legendary British act 40 years ago, but it’s reach goes far beyond that. It remains an ageless wonder, whose themes, from childhood memories, to struggle, to war, and to death, reflect the entirety of the human experience.