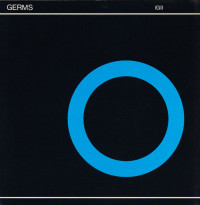 If you spend any amount of time reading about the history of Los Angeles punk, you will see the name Darby Crash (or sometimes Bobby Pyn) everywhere. He was an ever present, larger than life figure in that nascent LA scene. Perhaps no single person was as responsible for bridging the gap between the downtown art punks and the hardcore punks that rose up from the beaches and suburbs. This is even more impressive when you consider that he only lived to the ripe old age of 22, and recorded one proper Germs studio LP. Of course that album, (GI), is considered by many to be the first hardcore full length.

Germs had released their first single, “Forming”, in 1977. At that point the band could hardly play. Only a young Pat Smear had any sort of musical ability. By the time (GI) came around in 1979, the band was actually a well oiled machine. Their chaotic live shows had somehow forged them into a real band. A good one even. Former Runaways guitarist and future solo star Joan Jett produced the record, and captured the band at their peak. Smear had become a fairly accomplished guitar player by this point. Crash had come a long way as both a singer and a lyricist. Even bassist Lorna Doom and drummer Don Bolles had become a capable rhythm section.

The highlights of (GI) will be familiar to most serious punk fans. There’s the rhythmic, succinct opener “What We Do Is Secret”, and the nearly ten minute, largely improvised live closer “Shut Down (Annihilation Man)”. Then there’s the jagged punk and hardcore of “Richie Dagger’s Crime”, “American Leather” and “Lexicon Devil’. Crash’s surprisingly poetic words are delivered with a raspy, venomous snarl. “Land of Treason”, ‘Manimal’, “We Must Bleed”, “Media Blitz”, “The Other Newest One” and “Dragon Lady” still pop 40 years after they were originally committed to wax. All the songs are great, and have aged well. They were minimalist but powerful.

The temptation, when someone dies as young as Crash, is to lament what could have been. In the case of the Germs, it’s probably better to celebrate what they were able to do in such a short time. It’s hard to imagine Crash growing old and becoming a wise, old, boring documentary talking head. Crash, and a few others like him, were definitely early architects of punk’s “live fast, die young” ethos. So as good as (GI) was, it was even more influential. Without the Germs, it's likely that bands as diverse as Poison Idea and Nirvana would not have existed as we knew them. In the case of the Germs, it really was better to burn out than fade away.