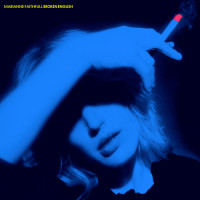 In 1964, Marianne Faithfull released “As Tears Go By” written by Mick Jagger and Keith Richards, a year before The Rolling Stones put out their own version. She had a sweet, folky sound which drove her first six albums.

In 1979, Marianne Faithfull released Broken English. It shared almost no characteristics with her back catalogue. A lot had changed.


Much of Faithfull’s life between her breakout single and Broken English has been well-documented. She was responsible or claimed partial responsibility for some of the greatest Rolling Stones songs, including “You Can’t Always Get What You Want” and “Sister Morphine.” She ended her relationship with Jagger, suffered a miscarriage, lost custody of a child, was homeless for some time and, most notably, had a drug problem. Between the drug abuse and the laryngitis, Faithfull’s vocal cords were permanently damaged. But all the terrible experiences left her with a new perspective. From the moment you hear her voice it’s clear, Marianne Faithfull needed an outlet. And Broken English was just that.

“Broken English” acted as a mission statement for the album, powerfully letting the world know she was back, and everything had changed. No longer a sweet folk singer, Faithfull came out with a new post punk sound. The song, inspired by the terrorist group the Baader-Meinhof Gang, was confrontational and the voice singing it was unfamiliar. It was raspier and the cracks were audible. She sounded like a woman at the edge.

With the help of producer Mark Miller, Faithfull gave her sound a modern twist. “Brain Drain,” a song about drugs too on the nose, continued the post punk sound. It acted as her way of taking control of her past, which could be said about most of Broken English. “Guilt” acknowledged exactly what the title implied. “The Ballad of Lucy Jordan,” written by Shel Silverstein and originally performed by Dr. Hook & The Medicine Show, became one of her most well-known tracks and rightfully so. The song told the story of a housewife unhappy with her life. The synths were beautiful, and her voice was pained. Again, Faithfull was not afraid to challenge her register and keep the missteps. Her cover of John Lennon’s “Working Class Hero” saw her updating the song with a darker, more industrial sound. But all of these tracks paled in comparison to the album’s closer. “Why’d Ya Do It” was a shocking, descriptive account, more in your face anything else in her catalogue. The song sounded livelier with its reggae bassline and guitar upstrokes, but the heavy nature of the Faithfull’s voice leaves you feeling purposefully uneasy. The song, written by Heathcote Williams is forceful rejuvenation for Faithfull, ending the album on a darker moment of power reversed in her favor.

Broken English is still a powerhouse of emotion, and Faithfull’s backstory only makes it more triumphant. It is such a brutally honest recording from an artist who'd lost it all. Her vocals are strained as an accurate representation of herself. For more proof of this, check out her 1979 Saturday Night Live musical performance. Her voice cracks almost immediately but she isn’t fazed by it, accepting of her new persona. Broken English not only remains her best album but is a strikingly beautiful, honest, heartbreaking portrayal of addiction and redemption.