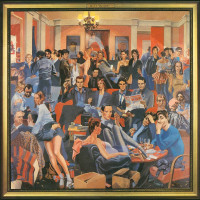 What an incredible year for punk albums 1979 was! A lot of absolute all-time classics came out in 79. Some were by established punk bands who were experimenting with different musical genres and pushing the boundaries (The Clash/London Calling, The Jam/Setting Sons, Public Image Limited/Metal Box), but a whole new batch of spiky herberts were about to make their full length vinyl debuts, and what a batch that was! Stiff Little Fingers, Angelic Upstarts, UK Subs amongst others all released their debut albums in 1979. And right up there with that illustrious list are the Ruts with their debut (and only) album, The Crack.


The album The Crack came on the back of their superb 1978 debut single “In a Rut”, and their June 1979 single “Babylon’s Burning”. “In a Rut” was a blistering reggae/punk crossover track issued on the People Unite label, a label created by the roots reggae band Misty in Roots. The brilliantly reviewed single earned them a BBC Radio One session with John Peel, and a contract with Virgin. Expectations were sky high! They were viewed as a more streetwise version of The Clash, with band members Malcolm Owen (vocals), Dave Ruffy (drums), Vince Segs (bass) and Paul Fox (guitar) actually coming from and singing about the areas of London that the Clash had long since abandoned.

The album The Crack was the result, and it lived up to all the hype. In fact a lot of “experts” rank The Crack as one of the top ten punk albums of all time. I know Henry Rollins does, in fact he loves it so much that he bought the original artwork that the cover uses! But I digress. The album came out in September 1979 and has 12 songs, although reissues have added other session tracks and b-sides.

The album starts with the blistering single “Babylon’s Burning”, probably their most well known track and one that went all the way up to #7 in the UK chart in June 1979. The energy doesn’t let up on the second song, “Dope for Guns” which tells of dubious political dealings between the UK and the Middle East. The brilliant rhythm section is particularly evident here: the powerful drumming and punchy bass-lines propel the song at a furious pace. Then we get the slower song “SUS”, a song about a police technique at the time. It stands for “Search Under Suspicion” and basically means that the police were allowed to stop and search any young person that looked at all dodgy. Punks and rastas were common targets, so the song was very timely and relevant to its audience. The fourth song was to be another top 30 single: “Something that I Said” and it’s catchy as herpes. Rounding out side one we have the very punky “You’re Just A” and the slow and moody “It Was Cold”.

Side two begins with the superb “Savage Circle”, a song with a repetitive backbeat that hits like a jackhammer. “Jah War” is next, a reggae banger that was destined to become the bands 4th single later in 1979. It covers similar territory to “White Man in Hammersmith Palais” but has some horns for a more roots feel. “Criminal Mind” is a fast oi!/street punk song, while “Backbiter” is slower and more biting with almost a traditional rock feel. The album finishes off with two straight ahead punk songs; “Out of Order” and the live “Human Punk”.

The album is superb from start to finish, and got incredible reviews. Expectations were skyhigh for the band, but they were ultimately scuppered by lead singer Malcolm Owen’s substance abuse issues that were growing, exacerbated by the right wing skinhead audience that the band started to attract in 79-80. After two more great singles in 1980 (one dealing with the skinhead issue, the brilliant “Staring at the Rude Boys”) the punk community was shocked to hear of Owen’s death in July of that year following a heroin overdose. The remaining three members of the band decided to carry on as Ruts DC and released some solid albums, (and in fact they are still an ongoing concern), but sadly they were never able to live up to the promise of the first singles and album. Malcom’s vocals were just so unmistakable and such an integral part of their sound.