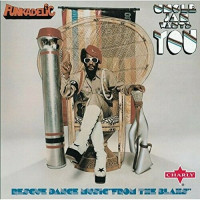 The 1970’s were a decade of band’s releasing classic albums, one of those bands was Funkadelic. They capped the decade off with what would become their most directly politically album, Uncle Jam Wants You. Combing elements of funk, soul, rhythm and blues, hard rock, psychedelic music, and delving further into the use of electronic instrumentation they began experimenting with on 1978’s One Nation Under a Groove. While expanding on its political elements.

One only need look at the cover of this album, featuring George Clinton in a classic Huey Newton stylized pose, to realize this album is likely to be more militant than anything Funkadelic had released before. Whereas previously the band had talked about a country ruled by funk music, and the ideals of those who “climbed about the mothership” this album was about how to get there. This album was about the revolution.

But, I don’t want to bog this review down explaining big ideas. Because nearly a fourth of this album is the indisputable classic “(Not Just) Knee Deep” and that song, alone, propels this album into classic status. At just over fifteen minutes long, it’s over five minutes long than any other song on the album. While a radio edit would top the Soul singles chart in 1979, you want to check out the long version. The number of funk/soul legends who play on this track is astounding. You’ve got George Clinton, Walter Morrison, and Phippe Wynee on vocals. Michael Hampton and Walter “Junie” Morrison on guitar, and Bootsy Collins on drums. All of them turn in top of the line performances, and some of the guitar playing on here is the best you’ll hear from anyone in Funkadelic not named Edie Hazel.

As for the influence of this album, all you need to do is look at the early nineties hip-hop scene. Samples of “(Not Just) Knee Deep” can be found in De La Soul’s “Me, Myself, and I,” LL Cool J’s “Nitro”, Tone Loc’s “Funky Cold Medina”, and the song is sample a few times on Snoop Dogg’s debut. Dr. Dre’s “Fuck wit Dre Day (And Everybody’s Celebratin’)” was based on this song. There’s hundreds of other songs that all sampled this one song. It’s influence in hip-hop is nearly unmeasurable.

Funkadelic were legends by the time this album came out, and this album further cemented that legacy. When hip-hop groups in the late eighties and early nineties began sampling this album’s single, it introduced the song to the next generation. This might not be Funkadelic’s best work, though their discography is varied enough taste can change that opinion. But, it likely is their most influential album released in a decade where all the band did was release influential albums.