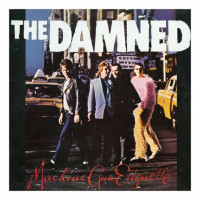 Earlier this year, I was fortunate enough to see The Damned play Machine Gun Etiquette in its entirety. The band gave a crackling front to back performance of the 40 year old gem. I gave that record quite a few spins in the weeks leading up to the show, and it still sounds as vibrant as ever. While it’s now considered an undisputed classic, it’s a record that almost never happened. Let’s start with a brief history lesson about The Damned. Those of you who are already familiar with the story might want to skip the next paragraph.

The Damned formed in London in 1976. They were the first English punk band to release a single (“New Rose” 1976), and the first to release an LP (Damned Damned Damned 1977). The band’s debut album is considered to be one of the most important and influential punk records of all time. The bands follow up LP (Music for Pleasure 1977), was produced by Nick Mason of Pink Floyd fame. (They originally wanted Syd Barrett.) It was an odd choice, to be sure, and the record was largely panned by fans and critics alike. The Damned briefly broke up in its wake.

Fortunately, the split was short lived, and the band came back with a vengeance on Machine Gun Etiquette. The Damned always seemed to be musically restless. Unlike many of their punk peers, they weren’t content to churn out the same record over and over again. The beauty of Machine Gun Etiquette was that it had enough traditional punk to satisfy the faithful, but also showed some serious musical growth. In fact, it was a preview of where the band would head musically in the ‘80s.

The record opened with the one-two punch of “Love Song” and “Machine Gun Etiquette”. Orthodox punk fans were instantly relieved. The next two songs, “I Just Can’t Be Happy Today” and “Melody Lee”, had more of proto goth feel. “Anti-Pope” was a catchy, scathing, pop punk track about Catholicism specifically and religion in general. “These Hands” was probably the most out there thing the band had done to this point. It was a swirling, psychedelic, circus inspired song that felt a million miles from “Neat Neat Neat”, only two years earlier.

The Ed Wood inspired “Plan 9 Chanel 7” led off side B. At over five minutes, it was an epic by punk standards. It was bluesy and goth, and had just the right kind of tension. By comparison, “Noise Noise Noise” felt like a throwback. The Damned’s cover of MC5’s “Looking At You” was a part of a winning formula. (They had covered The Stooges’ “I Feel Alright” on Damned x3.) “Liar” was another classic punk track. “Smash It Up (Part 1)” just felt like a long intro for “Smash It Up (Part 2)”. Its chiming organ made it as original as it was catchy.

Machine Gun Etiquette was 35 minutes of eclectic but compelling punk rock. By challenging themselves musically, The Damned made a record that challenged the listener. The reward was captured in the grooves. The Damned are the last band standing from that first influential generation of UK punk. Could you imagine a universe where the Sex Pistols were still putting out meaningful records and playing great live shows? They couldn’t even survive the ‘70s. What about The Clash? They made it almost a decade before their pitiful end. Somehow The Damned have persevered. I think you could argue that Machine Gun Etiquette was pivotal to their survival, but most importantly, it’s a damn fine record.