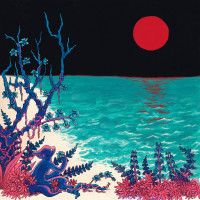 It’s a lot, is the first thing to know.

I can’t say exactly where you will have your own personal “this is a lot” moment with the first glass beach album, but I can tell you mine came on “glass beach,” the album’s mid-point and, arguably, it’s emotional peak. It comes about 5:40 into the song, in the form of an almost theatrical swell, in which an unnamed narrator tells an unnamed associate “I love you, ok / it’s so hard to say / that I fucking need you too,” and the song explodes into a guitar solo that’ll sound and feel familiar to any fan of the Jeff Rosenstock extended universe. This comes after the jazz-by-the-way-of-hardcore first breakdown, the guitar-hero stadium solo second breakdown, the dramatic space-rock interlude, but right before the two-minute tone-poem that ends the song and transitions into the back half of the record.

But that’s me. You might feel it at the piano and pitch-shift vocal introduction on the album’s lead off track “classic j dies and goes to hell part 1” (from there, it shifts into a yacht rock song, before becoming an Elton John song before becoming, again, the kind of “we’re in this together” anthem indicative of music made in and around Long Island). Or maybe it’ll hit you mid-way through “neon glow,” when the call of “we need to get off of this planet” is met with “Space Odyssey” style tone shift. Hell, maybe it won’t hit you until the plodding, extra-dirty, extra-digital bass grinds you down on album closer “orchids.”

So, yeah, it’s a lot. Frankly, it’s hard to discuss the firs glass beach album without stripping it down to its core components. A way in might be to look at the record as a response to / admonishment of cultural collapse; in an era when you can listen to everything, and with a little elbow-grease you can make yourself sound like anything, it shouldn’t be a surprise that artists are trying to sound like everything all at once. The band describes its sound as an embrace of “genrelessness caused by the increasing irrelevance of record labels and democratization of music brought about by the internet.” Normally, that’s the kind of thing a band writes when they’re getting too excited about themselves. Here, it feels like something of an understatement. There are flashes of almost every shade of Big Feelings music, from jazz to new wave and well beyond. Suffice to say, if there’s a style of popular rock that’s hit high school band kids in the last 50 years, it shows up in part on this album

There’s a long lineage of this kind of theatricality in emo that throws the first glass beach album into comparison with bands like My Chemical Romance, Say Anything, Bomb The Music Industry and, more recently, Barely March. And, to be sure, this is an emo album as much as it is a collision of influences. The vocal styling, subject matter in the lyrics, and heart-on-sleeve presentation of the material will be familiar to anyone who has worn a knit hat indoors in the past decade. The record also carries a darkness in the margins that feels reflective of the time in which its made; there are multiple references to trying to escape something broken, to natural things being turned unnatural, to trying to make it through together, that echo both the genre’s hallmarks and a more pessimistic underbelly belying the “I need you” sloganeering.

If you were to remove all the flourishes from this record - if, for example, these songs were all straightforward fourth-wave emo - it’d be a recent genre highlight. That all these disparate elements can exist, that it doesn’t feel like looking at a browser window and seeing 40 tabs open at once, establishes glass beach as a band that is planting their flag among a sacred class of extremely online artists making music reflective of a time in which we all have everything, always, and no one is happy. the first glass beach album may not be the best album you’ll hear all year, but it is certainly the most album.

Fil McRackin and The Hens / The Evil O'Brians: SPLIT EP