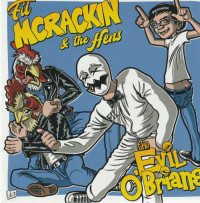 Fil McRackin and The Hens / The Evil O'Brians

McRackins bassist Fil has a new outfit appropriately titled Fil McRackins & the Hens. On this debut release, they have teamed up with German pop-punks The Evil O’Brians. Each band rocks and rolls through two originals and one cover each on this split 7” release. If pop-punk is your bag, then you are going to want to read on.

Side A kicks off with McRackins-style humor in “Scramble Your Brain.” The track kicks off with that familiar and palatable guitar lead one would expect from this Canadian outfit. What really sets this group apart from the McRackins is Fil’s vocal style. His vocals have more grit. Ryan from Off With Their Heads or even Larry from Pegboy come to mind. This style is a nice contrast to the classic pop-punk guitar leads and rhythms. Next is “Gonna Poach Your Girl” which highlights a solid moving bassline throughout. Strong guitar leads and backup vocals make this another egg-cellent little number. Finally, Fil and the Hens conclude with a cover of “Stop Looking At My Underwear” by Brooklyn’s Sea Monkeys. This is the heaviest hitter on their side of this platter.

The Evil O’Brians begin with “Don’t Call Us Evil O’Brains” on Side B. I am not going to lie. The first time I saw the band name a few years back, I made the same mistake! I chuckled when first reading this song title. This song has a strong 90’s pop-punk production style which will appeal to many. The highlight of this track would be backing vocals throughout the entire track which makes for a perfect sing-a-long. Next up is the heavily Ramones influenced “Three Chords No Brain.” This straight forward rocker has a strong Beatnik Termites feel to it. For their cover track, the band chose “Luka” by Suzanne Vega which is listed on the sleeve as “Bonus Track.” The Evil O’Brians made this song their own. Downstroke guitars along with crisp vocal breaks are present. I was never a fan of this song. This cover unfortunately does not change that fact. Most importantly, the band seemed to have fun with the cover.

Overall, this is an extremely pleasurable listen. Fil McRackin & The Hens show a lot of potential. I expect good things for them and hope for a full-length release down the road. The Evil O’Brians continue to offer up strong 90’s influenced pop-punk. This was a solid pairing of bands to pit against each other on this split release.