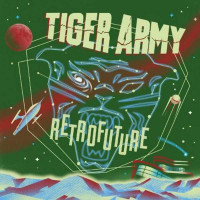 California's Tiger Army are a band I honestly can't see doing anything wrong. I remember looking at the feedback on V and wondering how could people not love this record, or the band no matter which direction they went in. As a huge fan of AFI, as much as Nick 13 may seem to rip off Davey Havok or the band's iconic sound at certain points, it's still hard not to deny Tiger Army's a beast of its own. And once more, Retrofuture is a perfect example why.

There's the old school 'punkabilly' style on tap which I admittedly would love more of in songs like "Eyes of the Night" and "Death Card" which remind you of the fury of '90s-era Tiger Army. These songs, in particular, help to add a sense of urgency to a band who honestly have found strength in slower burns and more, well, a more romantic style as of late. But again, aggression and throwbacks to the past are always welcome to remind us of Nick's early days of writing and how Tiger Army saw the world through a different outlook. Of course, you can't rule out surfer-buzz tracks such as "Devil That You Don't Know" which honour a certain part of LA culture, adding balance to the more Western punk/Latin aspects of the band as per "Mi Amor, Mi Luna" -- and make no mistake, the latter is as beautiful as Nick gets on the mic. This duality is part of the allure and yet again, Nick pulls it off with aplomb.

What I love a lot is how songs like "Shadowlight" are short and sweet, feeling like the last Wolf Parade record, but also inviting the prospect of Tiger Army getting a bit more inventive on their next go. I feel like songs such as "Black Neon" do come off a bit formulaic, and while this body of work is some of their catchiest to date, there's a bit more exploration needed moving forward. That said, you can't help but love the Jimmy Eat World-Elvis signature of songs like "Valentina" -- aka the band's staple -- to remind you of the ethereal magic at hand and why loyalists will keep reminding you 'Tiger Army Never Die!' This album's pretty straightforward and pulls the best from the last few T.A. records to remind you simplicity does work well for some bands and Nick and Co. are just one of such.

Fil McRackin and The Hens / The Evil O'Brians: SPLIT EP

Jagger Holly: The Last of the International Playboys