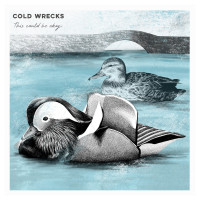 I’m not really sure where Cold Wrecks exist in the punk rock universe. They’ve been pumping out records for a few years now, but it’s still pretty tough to pinpoint where exactly they fit in. It’s like they’ve come from a world of pre-adulthood sadness and pop-punk pizza parties that’s been Midwestern-ized with gloominess and despair. In their short career, they’ve mastered the ability to serve up songs deep with negativity and deliver them in a fun-loving, positive tonality. This Could Be Okay is a more polished version of this approach, where you catch yourself with an ear-to-ear smile, singing along to subjects of loneliness and self-deprecation.

The bass-driven style that so often personifies the sound of many bands hailing between the coasts is really the true force behind This Could Be Okay. It’s always been part of Cold Wreck’s DNA, but now the thumps are deeper, the twangs are punchier, and on a track like “Crossing Sign,” you see how well it drags the melody and other instruments in a steady, rolling flow. This continues on standout, “The Season,” where they dive into seasonal depression, but produce a roaring, high-hat pounding chorus welded together perfectly with a Kody Templeman-like lead riff and bouncy verses.

Mental health and instability are a common theme throughout, but the light-heartedness and optimistic sound of the songs make This Could Be Okay so appropriately titled. On “Light,” for example, the lightest song on the record coincidently, they wrap soft harmonies and subtle eruptions around isolationism. The closing lyrics of “You picked up some habits / That you’re trying to break / Before you break” is where you hear that underlying adolescent pop-punk influence to the likes of Motion City Soundtrack and Modern Baseball. You’ll notice it on opener “In Time,” and “Garbage Universe” too, where there’s hints of vocal similarities, but only a small piece of the final product. Oddly enough, you’ll also catch some other unintentional vocal nods to bands light years away in the pop-punk space to those mentioned here. They channel their inner Dr. Frank in the raspy, high-note chorus of “8mm,” closing it out with the perfect immersion of female vocals bringing it to an end.

What I got out of this record is that Cold Wrecks just need some love, both at a personal level and as a band. They want to grow out of their panic attacks and grow old without regret so that they don’t end up dying alone in a hospital on Long Island. The songs that bring this inner-darkness to life are just too good to be lost in the vast punk rock universe. This Could Be Okay could appeal to all worlds within in it, so maybe a little bit of love is what they need to grow into their own little planet.

The Bridge City Sinners: Here's to the Devil