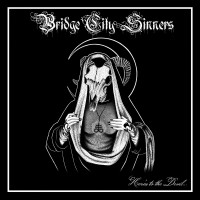 For most, The Bridge City Sinners need no introduction, but for those who’ve been hiding under a rock for the past few years, this collaborative effort from various Portland musicians, almost all of which have other musical projects, has been putting out horror folk since 2016. With often dark lyrics and themes displayed over rowdy folk tunes, played at punk tempos, it’s no wonder they’ve gained a large cult following.

Their newest release Here’s to the Devil leaves nothing on the table. It leads off with a one two punch of “Kreacher” and “Virgin Sacrifice”. Both tracks display the intense musicality brought forth by the collective. Most notably, in "Kreacher", the fiddle playing by Lightnin’ Luke shines to the forefront, pairing perfectly with Libby Lux’s vocal styling, to present a morose tale. The second track relies a bit more heavily on the group acting as a singular unit, with choral vocals moving the effort from dark to disturbing, and a blend of strings setting the tone for Libby’s ever expanding vocal range, complete with blood curdling growls.

Slide down a few tracks to “Run from the Sun”, and you get the first feeling that something happy may be coming your way. The cheery fiddle, and upbeat bass line will get stuck in your head, and smile may even appear on your face. That is, until you start hearing the lyrics. BCS are great at creating this paradox of a happy tune, one that might even lead a listener to want to dance while singing about all of the debauchery that comes with the sun going down.

“Witches’ Wrath” is by far my favorite tune on the album. The opening guitar line is catchy, but then its blown away when the full instrumentation plugs in at second eleven of the track, and from that point on, my feet would not stop tapping. Libby does a great job of elevating her growl at the perfect times, in yet another tune that has that upbeat (I call it happy) feeling pouring out of the various strings and the washboard. This song, in my opinion, is their showcase piece, with every instrument, including Libby’s voice, playing their part to perfection. The final line, “I’ll live out the afterlife as the Devil’s little whore” really brings together the feel from start to end of what can only be described as a female fronted version of Samhain, playing folk tunes.

I look forward to what this gang of ghouls, guys, and gals do next, especially from all of the side projects the musicians within this band continue to release. Flail records (started by bassist Scott) has done a good job of giving an outlet to each of these side projects, and so far I have been a fan of every artist he’s been able to grab (noting that about half are in BCS with him), but I also look forward to what the Sinners bring next.

Cold Wrecks: This Could Be Okay