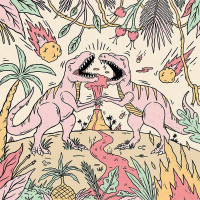 Barely a year after their debut release, Lone Wolf is back with another catchy, low-fi album, Together Alone. The Dutch foursome have pieced together a collection of songs that toe the line between punk rock and indie rock with a healthy dose of emotional singalong lyrics.

I’m typically not drawn to bands with an indie, low-fi sound, but this album caught my attention after the first few songs. While their are exceptions, the band generally sticks to a songwriting formula that builds anticipation throughout the first minute or so of each song until you ultimately reach the point in the song that is apt to suck the listener in. Typically, there’s a catchy opening riff, a verse broken up by a musical interlude that eventually builds to a chorus with repeated lines that have slight variations. There are numerous examples of this. As a result, lines like “Do you wanna runaway baby?” and “I’ll be waiting on the other side” are sure to stick with the listener.

While the production is slick at times, the overall feel to the album is based on a low-fi, indie approach. This is accomplished through the tone of the vocals and guitars, the latter of which maintains a bright, jangly sound often highlighted by catchy little lead riffs (i.e. “Waiting on the Other Side”, “Something to Destroy”, “Tearing Me Apart”). The vocals sound distant at times, though this is once again used to build anticipation for the sing-along parts. The band utilizes a duel vocal approach, but the overall sound remains the same and the lead vocals blend together well.

It’s somewhat difficult to nail down Lone Wolf’s sound. Sometimes, the album has a bit of a surf-rock feel (“Heartbeat”) with a hint of the Ramones. Sometimes, there’s a little fifties vibe sprinkled in (the bass line on “Together Alone”). And other times, the album reminds me of Daniel Johnston (the opening of “Don’t Know How”). But overall, the album maintains a cohesive approach that generally focuses on a soft/loud dynamic that builds and relieves some tension within each track. This is an album that bridges that gap between various different genres of punk. Consequently, the band will most likely pick up some new fans with the release of this record.

The Bridge City Sinners: Here's to the Devil