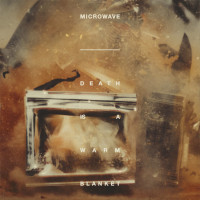 After seeing Microwave at 2016's Riot Fest I was thoroughly impressed. Much Love got me hooked on them and I couldn't stop digging into their discography, made easier by the fact it wasn't that extensive to begin with. Three years later and ironically, when this new album came out I was soaking them in at Riot Fest again. And history has a way of repeating itself because Death Is A Warm Blanket is just as solid, made all the more remarkable by the shift in tone of the message the Atlanta band's trying to convey.

Their older music felt more optimistic but after interviewing the band -- won't link but you can check it at New Noise -- vocalist Nathan Hardy revealed how an injury at a show, the struggle to make money from music and self-doubt crept in in the worst way possible. This all led to him regretting at times about art as a career and eventually influencing the themes of this record: skepticism, cynicism and a perspective that life might be more depressing than we think, so much so to the point this coldness might actually be comfortable.

Stylistically, Microwave cop to this with an intriguing approach, as the tracks feel way more aggressive than the last album, which erred more on the indie-punk side of things. Here, there's a lot more screaming and aggression, with the band channeling more of their grunge aesthetic which Nirvana fans, as well as modern enthusiasts for the likes of Sainthood Reps, Balance and Composure, Citizen and Sorority Noise could relate to. In short, it's emo meets post-grunge, as per songs like "Float to the Top" and "DIAWB".

It's all about paying homage to the '90s but with Microwave's distinct flair, carving less of a punk identity and more of that old-school sensibility which even Nine Inch Nails lovers could relate to. "The Brakeman Has Resigned" best sums this up, although I must admit at times the lo-fi, grainy vocals feel overdone and like a chore to get through. It's abused here and it sucks as it's something I enjoyed on the previous record as it was littered in intervals. But seriously, they're flogging it to death now.

That aside, I do love how the early-era Manchester Orchestra sound (hey, they're from Atlanta too) pops up with bits of modern Taking Back Sunday in the mix as well. "Leather Daddy" is a prime example of this, with the closers in "Carry" and "Part of It" more or less mimicking Andy Hull's delivery, style of writing and Manchester Orchestra's overall hooks and choruses. Still, the catchiness is signature when it comes to Microwave, who honestly should be using more of this indie-punk style. It feels like their biggest strength but still, I can't hate on a band filling an album with versatility like this. Once more, Microwave heats up the airwaves and this is another positive step moving forward.