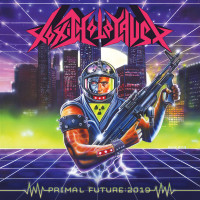 Toxic Holocaust is, without a doubt, among the most important bands of the post 2000 thrash revival. They’re an inspired mixture of Metallica’s Kill ‘Em All era speed metal and thrash, Venom’s raw evil and Nuclear Assault’s foreboding message. Six years after their last LP, Chemistry of Consciousness, Joel Grind is back with a vengeance. I say Grind, because he returned to his roots and played all the instruments on Primal Future:2019. He also wrote, recorded, mixed and mastered it. Grind has established himself as a whiz in the studio, and the production on this is perfect. It’s crisp and clear, while still maintaining a nice rawness.

Toxic Holocaust made a couple of choices on Primal Future:2019, that might not have worked for lesser bands. First, the addition of the :2019 could easily seem pretentious, but for some reason it doesn’t. If anything, it makes the title seem that much more significant. It gives it a certain gravitas. Ditto the artwork. The futuristic Robocop/Tron theme walks a fine line between cheesy and and cool, but ultimately comes across as epic. That’s metal in a nutshell, always trying to find the balance between the awesome and the preposterous. Fortunately, Grind is a guy who knows the difference.

The record is divided into the Radiation and Fallout sides. The Radiation side opens with the shredding “Chemical Warlords”, and its timely “You build it up/We’ll tear it down” lyric. It really sets the pace for the nine songs that follow. They are loaded with lightning fast riffs and frantic early Dave Mustaine/Kirk Hammett style guitar solosThe very metal sounding “Black Out the Code” and “Deafened By the Roar”, along with the more sci-fi oriented “New World Beyond” and “Time’s Edge” round out the first half of the record.

Side Fallout is more of the same, and that’s a good thing. The slower, almost title track “Primal Future” leads to the fast, nearly unhinged “Iron Cage”. “Controlled By Fear” rages against religious dogma, and “Aftermath” talks about humanity’s extinction. Both contain plenty of speed, but also have those great choppy breakdowns. Grind’s vocals sound like they’re echoing out from a large, empty, stone building. It almost adds a horror element. Closer “Cybernetic War” is a nice bookend to the opener from a half hour earlier. While not a concept album in the truest sense, the songs all work together to create the mood and tell a bigger story.

It took a long time to make this 6th full length, probably due to Grind doing so much studio work for everybody else. The wait meant that expectations were high for Primal Future:2019, and Grind and Toxic Holocaust have met those lofty expectations. It’s an album that can hold its own against the band’s best material. The art, layout, and physical packaging are very nice too, which is always a bonus. It even includes the lyrics, so you can follow along at home. Headbangers and Speed Metal Punks, old and young will all find plenty to like on Primal Future:2019.

Microwave: Death Is A Warm Blanket