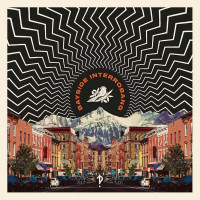 NYC's Bayside is back with another full length of aggressive, heavy hitting pop punk with Interrobang.The four-piece, fronted by lead vocalist/guitarist Anthony Raneri, is known to dish out a variance of moods, from metal riffs all the way to emo love ballads, but the ten track full length indicates quickly that this may be their hardest collection of songs to date.

The album fires open with classic Bayside guitar riffs, bordering on cock rock, with double snare drum hits to match. The aggressive guitar sprinkles a needed energy on top of catchy choruses and Raneri's dry and low-registered vocals. The self-titled album starter leads into the banging gallop of "Prayers," before resolving to an addicting sing-along chorus in six-eight time. The verse/chorus rotation ultimately lands on a shredding solo from guitarist Jack O'Shea and the tune completes as hard as it opened.

"Bury Me" introduces perhaps the highest quality pocket of songs on the album, with pitted instrumentation that weaves into one of the faster tempos found in Bayside's more recent catalog. The quick drumming perfectly piggybacks the ambient guitar and tragic lyrical theme, all the way to a gigantic bridge and some expert level finger-tapping from O'Shea. "Tall" signals on with lone hand claps and completely unprocessed vocals from Raneri, before cranking up the band's unique sound into another spectacular story. This track is a technical masterpiece, and confined between the three minutes or so of full band performance lies a showcase of talent from all four individuals.

"Medication" takes a break to bring down the power for a moment, (though I wasn't complaining,) but is filled with an infectious hook throughout a stacked pop punk anthem, it is the constant unpredictability of Bayside's instrumentation and song structure that has kept the band in command since 2000, and Interrobang is a fine example of that truth. "Numb" offers a slower, eerie vibe, interesting chorus, and a notably killer aria from Raneri on the second verse. The jaunty rhythm of the song devolves into a spooky guitar duet before hitting extra hard on a final chorus and outro.

"Heaven" totally shifts the mood to pop, emitting carefree guitar leads, relaxed drumming, and honest lyrics on to an epic chorus. It is a sentiment to both the quartet's musicianship, and Raneri's vocal delivery, that such a song can even belong on the same album with six, thus far, bangers. Somehow, it fits, and without jarring the momentum loose, and is a needed spot of real estate on the thirty-six minute full length. "Trouble" kicks right back into crunchy guitar octaves and metal guitar picking, however the tough intro and verses resolve into textbook pop-punk pre-choruses and a unique key-bending chorus. The ultimate bridge and outro of the song is a huge moment for the record, capturing Raneri's wide range and timbre.

"Walk It Off" addresses the fathered tradition of toxic masculinity over another massive instrumental, and the song tells a complete story without any dedicated guitar solos or wide open spots, which is difficult to accomplish, but the melody holds it's own throughout three and a half minutes. Album closer "White Flag" rips open with more metal riffs, snare rolls, and leaves only the choruses for a moment of breathing room. Much like "Bury Me," Bayside has possibly never rocked as rad before or with such a significant beats-per-minute.

Interrobang slams shut on a thirty second rager outro that speaks more than I could ever summarize in html. The album rips, and Bayside is only getting better.