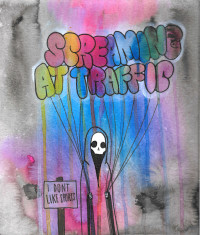 Lo, the burly boys are in their feelings again.

Historians will disagree at which point, precisely, the gruff bearded men of punk rock decided to mix their textural chocolate with a certain sect of emo’s self-flagellating peanut butter. For my money, the flashpoint is either the first Iron Chic record or the second Off With Their Heads record and if either of those made an impact on you, odds are good that I Don’t Like Sports’ particular brand of self-loathing, on-the-nose emo-punk will feel quite familiar.

Screaming at Traffic deploy a kind of subtext-free lyrical barrage that waffles between confessional and performative, depending just how much you hate yourself at the given moment. It doesn’t feel like a coincidence that the album opens with lyrics like “I’m so sorry that I’m not the person you thought I’d be … it’s just hard to be an adult sometimes … I just cause problems / if I was gone I’m sure you solve them.” That’s more or less the album’s operating perspective; the narrators in these songs are half-children, tripping and falling through a world they are not prepared for, and feeling bad about themselves out-loud in the process. In this light, lyrics like “I’ll waste your time” aren’t threats, they’re promises.

What’s always sells this style of punk is the juxtaposition between message delivery. For all the woeful tales of low self-esteem that the album tells, its performance and composition are as confident as anyone’s. The band is smart about adding considered textures to its straight-ahead pop punk style; the chunky distortion effect on “They Call Me “Thrillhouse”” turns what would have been a twinkle-pop song into something far beefier, and the fluctuation between straight-ahead power chordin’ and more spacious guitarmonies on “I Don’t Like Sports” go a long way to breath life into a well-worn sound.

I Don’t Like Sports finds its groove in the center of the record, on a three-song run that starts with the title track and ends with “Broken Teeth.” These three tracks feel apart from the rest of the album, almost as if they were written in conversation with each other. They find the band at its melodic peak, bringing a little sun into their gloom, and also a little spine. A throwaway line like “I never want to outlive any of my friends” does a lot to color the album’s perspective beyond self-hated into a more nuanced fear, and the drive of a song like “Bitter”, with its salty chorus of “I want to be mean and bitter” brings some much needed salt. Sure, the second-half of that couplet is “I wish I could just get better,” but that’s the other truth of the speedy sad-punk that Screaming at Traffic peddles on its debut. Healing comes, but suffering comes first. There are worse ways to suffer.

The Ataris: So Long, Astoria Demos