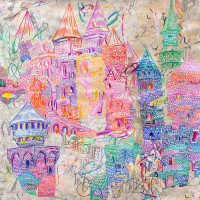 This is gonna date me a bit, but anyone remember the Maxell ads from the 1980’s that featured the “Blown Away Guy”? He’s holding onto the arms of the chair, in a white-knuckled wrestling match with volume. Scarf, hair, and lampshade seemingly caught in hurricane-force winds. That’s what it feels like every time I listen to Lightning Bolt. Forget genre descriptors, this is simply kinetic volume rock.

Sonic Citadel is the new one from these Rhode Islanders. They’ve been taking patrons on dense, brain-busting adventures for over twenty years, using little more than a bass (with oodles of effects and distortion), drums, and a cheap microphone. And on Sonic Citadel, the volume is once again deafening and the playing is nimble and full of life.

Repeatedly, Sonic Citadel dives into the deep end of throbbing and pummeling volume. Thunderous tribal toms and a heavy pulsing bass anchor polyrhythms, mostly indecipherable vocals echo in the distance, and repetitious and violent effects lacerate the eardrums. With effect-laden squeals, Chippendale’s should-be-trademarked quick-fire snare hits, and Gibson’s melodic bass anti-solos, the sheer brutality and astonishing flexibility of songs like “Blow To The Head” and the long gestating “Halloween 3” is jaw-dropping. “Big Banger” has this crazy “in-and-out” feel with the bass and kick drum playing off each other, creating the aural equivalent of staring into a strobe light. And there’s this weird bit in the middle of the song that reminds me of the Thrill Kill Kult song “After the Flesh”. And the closer, “Van Halen 2049”, is something to behold. At nine minutes, the song is a head-tripping endurance test. At one moment, the bass is seemingly going interstellar, in another the drums and bass hum like a hive of supernervous bees, and in yet another the sounds of something like an imagined sea monster roar to life. It rumbles and rambles and feels like it could fall into utter chaos at any moment, but it never does (this is part of Lightning Bolt’s charm). This could be the soundtrack to the world’s end.

Lightning Bolt does ferocious and blistering about as well as can be done. But on Sonic Citadel, they’ve also peeled back just a bit. “USA Is A Psycho” and “Hüsker Dön’t” both approach something near traditional. The structures of each seem almost conventional and they even leave the max volume behind for a fleeting moment or two, only to explode into snare mini-bursts (“USA”) and so-evil-it’s-right bass arpeggios, blurts, and washes (“Hüsker”). As if to emphasize this stripped down experiment, the fantastically titled “Don Henley In The Park” offers a bit of dynamic bliss while a looping line that almost reminds me of the guitar from GBV’s “Queen of Cans and Jars” shimmers over top. And a few songs later, the oddly sane “All Insane” grows with a pulsing bass and stomping 4-4 drums, feeling almost as civilized as Lightning Bolt can get. And remarkably, even when backing off the maximalist approach for these quick flashes, Lightning Bolt creates visceral and vibrant music.

Sonic Citadel is many things. It’s abrasive and blistering, it’s childlike and the sound of pure joy. On Sonic Citadel, Lightning Bolt is putting their name to some life-affirming music that holds up well alongside previous favorites like Hypermagic Mountain and Wonderful Rainbow. This is blissfully pulverizing music.

The Ataris: So Long, Astoria Demos