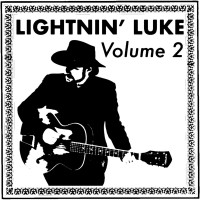 Lightnin’ Luke is yet another amazing side project of members of The Bridge City Sinners hailing out of the PNW “Flail Records” crew, alongside the likes of King Strang, Clyde and the Milltailers, etc. While most known for his amazing work on the fiddle in BCS, and many of their other projects, his solo projects have been garnering a lot of attention, and for good reason.

His voice is something, much like Clyde’s, that is only describable as something that is straight out of the time of the folk music that started with acts like Guthrie, Dylan, and even blues artists like B.B. King and Stevie Ray Vaughn. Couple that with lyrics that emote the same feelings as any of the greatest political punk bands, and melodic guitar that sends chills down your spine, all while remaining simple and stripped down. Like Clyde and King Strang, Luke is best when supported by his fellow BCS members, as these three seem to have a strange ability to blend each of their talents when supporting their colleagues, allowing for each to have their own, very different voice, while bringing the musical talents of three of the best musicians in this Folk Punk scene, in this man’s opinion.

While Luke’s solo work, in the past, has not been my favorite of the three, Vol 2, has brought out something special. The first two tracks are very traditional folk, bluegrass, old country (and amazing in their own right), but by track three, “Poison Angel Girl (From Insania Suite)”, Luke breaks out the punk inspired guitar, while remaining true to the roots that inspired this blend of two fairly contradictory musical stylings. Track four reverts to a slower, melodic tune, but showcases Luke’s intense ability to both write intelligent lyrics, and support them with the perfect voice to deliver them, and a simple melody that has literally made tears appear in my eyes when listening.

For those who want a more upbeat track, as a lot of Luke’s album is well paced, but not traditionally speedy like most of the acts in Folk punk, I recommend checking out tracks like “One Night” and “The Only Cowboy Bar in Portland”, both of which have a much more upbeat rhythm, but the idea of Punk, for me, is not reliant on speed, but a general ability to produce music that breaks the barriers of the traditional. Now, obviously, most of Black Flag’s songs wouldn’t work at the speed of a ballad, but Luke’s music works at this slightly toned down speed, and also works with each of the upbeat tracks.

I cannot think of anything negative to say about the album, other than it will likely not be something everyone will “get”. For me, this is a strong contender for both most underrated release of the year, and best album of the year. I cannot wait to see Luke, alongside his comrades King Strang and Clyde and the Milltailers at the coming Folk Shit Up festival in 2020, and I definitely can’t wait to see what he does next, both in his supporting role as the master of the fiddle on so many Folk Punk albums, but also what he brings to his next solo attempts.