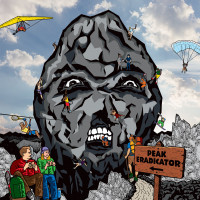 Chicago's own Kids in the Hall inspired squash player/hard core front man has dropped another album of Fucked Up meets Andrew W.K. powerhouses with Peak Eradicator.

The Eradicator is back and hitting even harder than 2017's release of The Eradicator. The album swings open with the faux live antics of "Call the (Era) Dic-Ator," the crowd packed intro builds on a chant of the title's name and explodes into an accurate emulation of the raw energy present at their live shows. Information technology guru and guitarist/vocalist Andy Slania, channeling the ski-mask clad sports freak, sounds more commanding than ever as he shouts over the thoughtful riffs and heavy drumming of "Warpath."

"I'mma Be Me" takes a jaunt back, with cleaner guitars and clearer vocals before diving into an enormous chorus of shouting and pitted sing-along vocals. The title track bounces from a sick drum intro into a wide variety of speeds throughout the song's short 52 second life before devolving into rapid fire blast beats. The short banger is hemmed neatly to the slower "You Know Too Much About Me Already." What sets The Eradicator aside from other scream-heavy singers is a vocal tone that doesn't get boring, much like Suicide Machines or Minor Threat, Slania's aggressive vocals are welcoming, and fasten the slick mix of guitars and drums closed into wonderful punk rock songs.

"Prepare for Battle" stands simply as a vocal intro or interlude to the rad and quite theatrical "Judge, Jury, & The Eradicator." The metal riffs speak for themselves and the energy level undeniably stands out. "Homesick" putts in with silly moog tones before hammering into a single-string guitar lead reminiscent of Masked Intruder or Teenage Bottlerocket. "You've Gotta Go" opens with a lone, brittle, guitar, and low-registered vocals from Slania followed by more heavy guitars, and fast double-time drums. The "fuck you" anthem closes out with Brian May-esque dueling guitars and is a tremendous moment of the album.

"Future Olympian" hits fast with electronic drums and more buzzing synth, the 64 second zinger takes cues from what an Atom and His Package song could have been had the singer been blessed with a tough bone in his body. "The Ultimate Irony" opens with a troubling skit in which the Eradicator is diagnosed with tennis elbow, and completes with a bizarre acoustic track with more gravelly, near-spoken, vocals. "Baby, You're so Worth the Investment" dives back into synths and loops, similar to the Show is the Rainbow, before falling back into another hard core punk sing-along. An unusually melodic chorus morphs into an enticing pocket of post-production, with additional vocals and a long fade-out. It is a rad change-up.

Peak Eradicator peaks with some classic pop punk in "Until We Meet Again," bidding the album adieu in less than two minutes and promising a return from the Eradicator himself. Quirks and gimmicks aside, this album is GREAT, and Slania's charming songwriting teamed with a variance of styles and a spot-on sonic mix are too perfect of a combination to be overlooked.