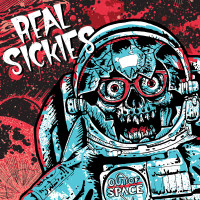 Real Sickies are a punk rock band from Edmonton, Alberta, Canada. The band is comprised of former members of BYO Record’s Wednesday Night Heroes. Real Sickies have been pushing their new LP Out of Space on the road throughout North America all summer.

Real Sickies are a tight and competent punk rock band. The band draws a significant amount of influences from 1970’s and 1980’s punk rock and power-pop including the likes of Teenage Head, and more notably The Ramones. Classifying the band as Ramones-core would be an obvious description. The band produces the typical short and concise, 4/4 punk rock anthem that could easily be compared to contemporary peers such as Teenage Bottlerocket, The Dopamines and The Copyrights. The tongue in cheek style crooning and catchy and memorable hook-laden choruses one associates with vintage pop-punk are apparent throughout Out of Space, but really shine in stand out tracks such as “Psycho Hop” and “It’s Been A While”.

Out of Space is a solid offering from a band of Canadian punk rock veterans. The album flows nicely and feels fresh on repeat listens. I can’t pick out much for filler in the 13 offered tracks; nothing stands out as skip worthy. On the other hand, I can’t help but wait for a track that really jumps off the page to separate itself from the typical Ramones-core formula. There is a lot of content to enjoy within Out of Space for the typical punk-rock fan, but I don’t see much movement outside of that specific market. In any event, I look forward to hearing new music and growth from a promising new punk band.

FFO: Teenage Bottlerocket, The Dopamines, and of course, The Ramones.